There has been a long standing dispute by Arabs against the Balfour Declaration of 1917 promising Palestine as a Jewish homeland.


Sir Henry McMahon, acting on behalf of the British government, met with Sherif Hussein of Mecca in 1915 and made what were taken to be a series of promises to the Arab people. These ‘promises’ were later disputed by the British government and, as with many issues concerning recent Middle East history, were open to interpretation.
Hussein interpreted the correspondence given to him by McMahon as a clear indication that Palestine would be given to the Palestinians [sic] once the war had ended. The British government was later to dispute this interpretation. They claimed that any land definitions were only approximate and that a map drawn at the time (but not by McMahon or a member of the British delegation) excluded Palestine from land to be given back to the Arab people.

By the time war ended in November 1918, two distinct schools of thought had developed regarding Palestine:

1) That the British had promised Palestine to the Arabs after the war had ended in return for their support to the Allies in the war.

2) That the British had agreed to give their support to the Jews for a homeland in Palestine as laid out in the Balfour Declaration of 1917.

It turns out that this same argument came up in 1937, when the Peel Commission issued its partition plan. In that plan, there would be a tiny Jewish state but the Arab state would become united with Trans-Jordan, seemingly under the rule of King Abdullah. (“two sovereign independent States would be established–the one an Arab State consisting of Trans-Jordan united with that part of Palestine which lies to the cast and south of a frontier such as we suggest in Section 3 below; the other a Jewish State consisting of that part of Palestine which lies to the north and west of that frontier.”)

At the time, Palestinian Arabs argued that the McMahon correspondence gave them the right to an independent state in Palestine and therefore the Peel Commission plan was invalid.

As a result, Sir Henry McMahon himself wrote a letter to the Times of London and set the record straight. The Palestine Post reported: 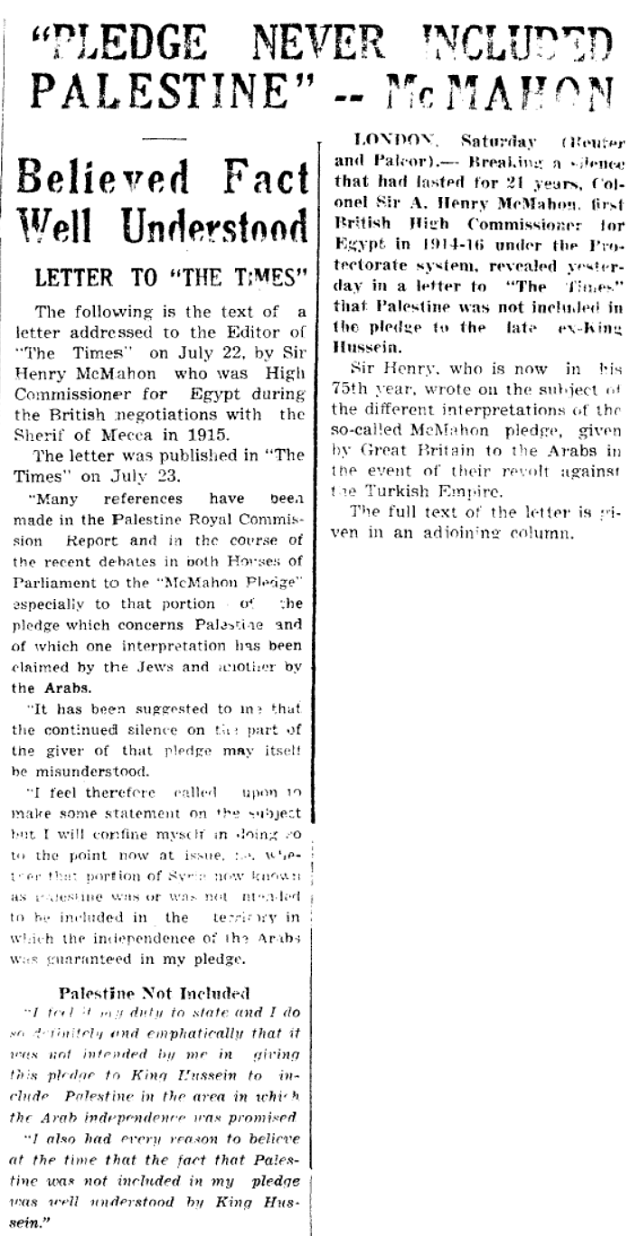 Many references have been made in the Palestine Royal Commission Report and in the course of the recent debates in both Houses of Parliament to the ‘McMahon Pledge’, especially to that portion of the pledge which concerns Palestine and of which one interpretation has been claimed by the Jews and another by the Arabs.

It has been suggested to me that continued silence on the part of the giver of that pledge may itself be misunderstood.

I feel, therefore, called upon to make some statement on the subject, but I will confine myself in doing so to the point now at issue—i.e., whether that portion of Syria now known as Palestine was or was not intended to be included in the territories in which the independence of the Arabs was guaranteed in my pledge.

I feel it my duty to state, and I do so definitely and emphatically, that it was not intended by me in giving this pledge to King Hussein to include Palestine in the area in which Arab independence was promised.

I also had every reason to believe at the time that the fact that Palestine was not included in my pledge was well understood by King Hussein.

Yours faithfully,
A. Henry McMahon.
July 22.

That should have settled the matter, yet even today Arabs and Arabists are arguing that the McMahon correspondence pledged an independent Palestinian state.