I’m quite sure that there are many people who think Max Blumenthal doesn’t have much of a reputation to lose, but he still seems to feel otherwise. So he reacted with great fury a few days ago when he found out that the Southern Poverty Law Center (SPLC) – which claims to fight “hate and bigotry” – had published an analysis on “how fascists operationalize left-wing resentment.” The piece provided lots of interesting material on “red-brown populist collaboration” and featured Blumenthal as an example of a supposedly left-wing activist who happily collaborates with media outlets and individuals promoting a far-right agenda.
Before most people had a chance to read the piece, Blumenthal managed to bully the SPLC into taking it down – though luckily someone was even quicker than Blumenthal and archived it before it disappeared. Why the SPLC caved so promptly is a bit of a mystery (– some clues later –), because all claims and conclusions in the analysis are meticulously supported by links.
Take for example the part that deals with Sputnik: it’s a media site that “has widely been described as a Russian propaganda outlet,” and Max Blumenthal has repeatedly collaborated with them to promote ideas that fit Sputnik’s agenda. 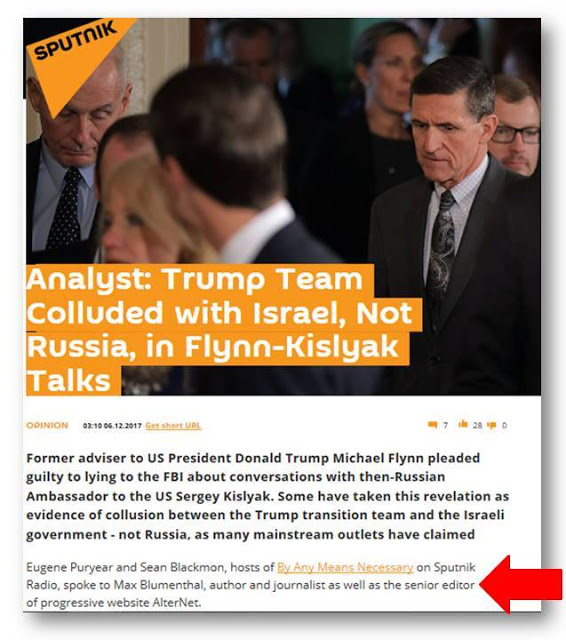 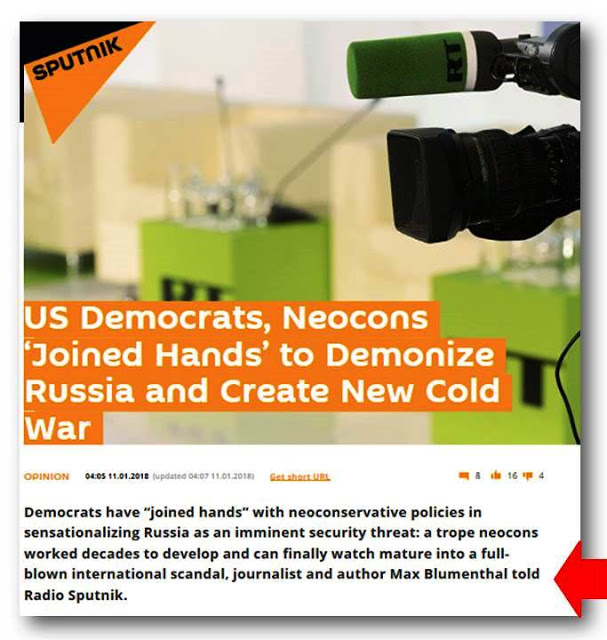 The SPLC’s retracted piece mentioned Sputnik podcast “Loud & Clear,” noting:
“Aside from marginal guests, Loud & Clear can bring on some heavy hitters. During his two appearances on ‘Loud & Clear’ in late 2017, bestselling author Max Blumenthal called the red-brown radio show ‘the finest public affairs programming’ and declared, ‘I am increasingly turning to RT America [Russian government-funded propaganda channel] for sanity.’”
Presumably, Blumenthal won’t dispute that he made these statements – which truly speak for themselves and reveal a lot about what he regards as “sanity”…
But one can’t deny that Max-Blumenthal-style “sanity” has its rewards: the lawyer who threatened the SPLC on Blumenthal’s behalf apparently did so pro bono, charging only a nominal fee of $20; and it just so happens that he is “a former Sputnik editor who previously represented ‘alt-right’ star Cassandra Fairbanks, who also worked at Sputnik.” One could indeed almost be tempted to conclude that “Russian state media promotes Red-Brown alliances.”
It is then hardly surprising that a recent Sputnik piece on SPLC’s craven retraction celebrates Max Blumenthal as a “prominent journalist and author (and strident critic of the West)” who can’t possibly be tainted in any way by his admirers on the far-right.
Well, let’s recall just a few of the relevant examples I documented a few years ago:
Back in 2010, Max Blumenthal attracted some heartfelt praise on Stormfront for his efforts to demonize Israel and Jews: “Max Blumenthal has done a great service for all of humanity here, and we WNS [i.e. white nationalists], and the rest of the world, ought to be grateful to him.” 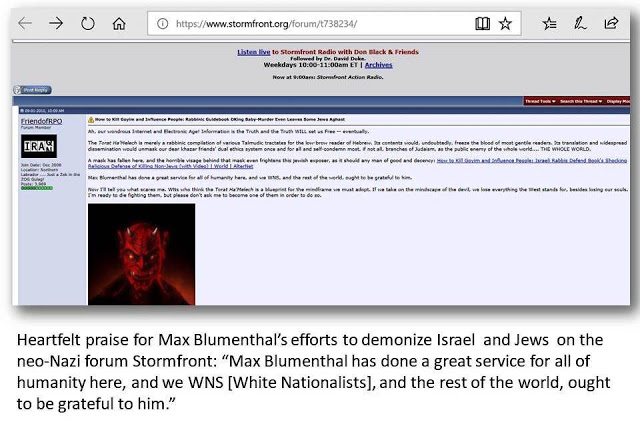 A few years later, when his vile anti-Israel screed “Goliath” was published, Blumenthal got some well-deserved praise on David Duke’s website: “Blumenthal’s recent book and much of his other work have been extremely valuable.” You can check out archived copies of some of the relevant posts here and here.
But when Blumenthal won plaudits from the far-right for demonizing the world’s only Jewish state, many of the people who are now so appalled by his apologetics for Putin’s Russia could see nothing wrong and were very happy to cheer him on. That includes the SPLC: as Blumenthal gleefully pointed out on Twitter, the organization had mounted an ardent defense of him in 2014 after it emerged that the far-right perpetrator of a deadly attack on a Jewish community center was an admirer of Blumenthal’s work. The SPLC passionately denounced attempts by “leading conservatives … to blame liberals for the massacre,” noting: “Specifically, they pinned the blame on a single liberal journalist, Max Blumenthal, because Miller [the far-right perpetrator] on a handful of occasions praised Blumenthal’s against-the-grain reporting on the right wing in Israel.”
So while the SPLC claims to fight “hate and bigotry,” they apparently also think that it’s part of their mission to whitewash a book that demonizes the world’s only Jewish state as the Nazi Germany of our time as “against-the-grain reporting on the right wing in Israel”…
The SPLC also asserted that “Blumenthal … is of Jewish descent and has spent years off and on in Israel,” and that he “does not ‘despise’ Israel” and merely “has written a number of articles that criticize Israeli policies.”
That was written on April 18, 2014. A few months earlier, the Simon Wiesenthal Center had published its 2013 list of the “Top 10 Anti-Semitic/Anti-Israel Slurs” and included Blumenthal in the category “The Power of the Poison Pen.” As I also documented at the time, during his book tour for “Goliath” in fall 2013, Blumenthal had discussed the urgent moral imperative to eliminate the world’s only Jewish state and had advocated a “Juden raus” policy for Israeli Jews who wouldn’t willingly “become indigenized” by accepting Arab-Muslim dominance in political, cultural and social terms.
Since the SPLC had no problem whitewashing Blumenthal’s agenda four years ago, it’s understandable that they now decided that it was a regrettable slip to expose his unsavory views and the fact that he has quite a few admirers on the far-right.
It is of course true that it can happen to every writer that people whose views one might find deplorable will pick up on one’s writings. But in Blumenthal’s case, it’s not an occasional article that was picked up by people on the fringes and put to unintended use. If you get complimented on David Duke’s site that your “recent book” and “much of” your “other work have been extremely valuable,” and if similar praise is heaped on you on quite a few similar sites, it’s plainly well-deserved praise.
But the SPLC’s defense of Blumenthal in 2014 is also noteworthy for another reason: while I agree that the fact that a far-right terrorist had cited Blumenthal approvingly “on a handful of occasions” does not mean Blumenthal inspired his deadly attack, Blumenthal himself had
Indeed, in another related piece, Blumenthal described Breivik as “a perfect product of the Axis of Islamophobia” and again emphasized that Breivik’s “writings contain the same themes and language as more prominent right-wing Islamophobes (or those who style themselves as “counter-Jihadists”) and many conservatives in general.” Needless to say, Israel loomed large in Blumenthal’s musings about Breivik – as he put it on the notorious “hate site” Mondoweiss, people like the Norwegian mass murderer “turn for inspiration to Israel, the only ethnocracy in the world.”
Well, guess what? These were ideas that appealed to Stormfront proprietor Don Black. In April 2014, he penned a post responding to allegations by the SPLC that Breivik and other far-right terrorist killers had been members of his forum. As Black confidently explained:
“Breivik’s murderous rampage was actually inspired by Zionist extremists. As Jewish peace advocate Max Blumenthal has documented, Breivik fell under the influence of Zionists Daniel Pipes, Pam Geller and Robert Spencer. So he attacked a youth group that had demanded disinvestment from Israel.” 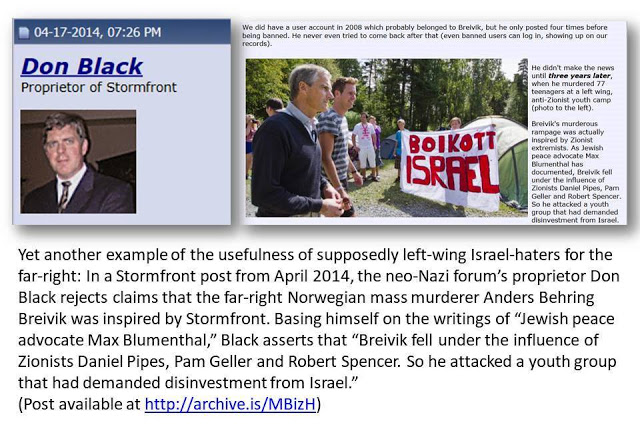 It’s of course just a coincidence, but it still is a great illustration of the absurdity of the SPLC’s defense of Max Blumenthal: Black published his Stormfront post on April 17, 2014 – praising Max Blumenthal as a “Jewish peace advocate” and trying to use his writings on Breivik against the SPLC, while the SPLC published its post defending Max Blumenthal against the kind of smears he had spread in the wake of Breivik’s murderous rampage one day later, on April 18, 2014.
Well, if you have so dedicated supporters from the far-right all the way to the progressive left…