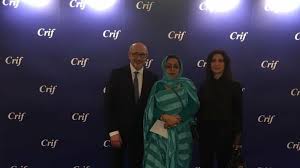 The “National Rabat to support the Palestinian people” released a statement saying that “the presence of Ambassador Amehiham at the dinner represents a new attempts of Zionist infiltration of the Mauritanian people through its embassies abroad, which is a bad and unacceptable, and we will not tolerate it, we will not accept it ever” .

The statement continued, “This represents a deep blow to the emergence of the Palestinian issue, and a blatant contempt for the proud Mauritanian people  which has long demonstrated its strict opposition to normalization with the Zionists.”

It said that eating with Jews was a “provocative and disgraceful act”, a “painful stab” and a “moral and political scandal.”

A Mauritarian anti-Israel student group called her attendance “shameful” and said, “Instead of the Ambassador choosing to fight in the same trench with the Palestinian people in their legitimate struggle against the occupation and reinforcing the anti-Zionist position of the Mauritanian people, the Mauritanian Ambassador is siding with the killers of children and usurpers of the land of the Islamic holy sites in Palestine.”