We’ve discussed Marc Lamont Hill before for his anti-Israel activities. 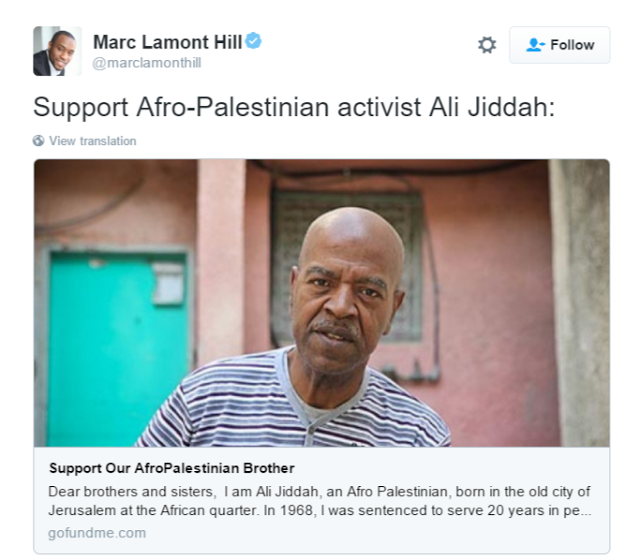 Who is Ali Jiddah?

From the book “Song of the Caged Bird: Words as Resistance in Palestine:” 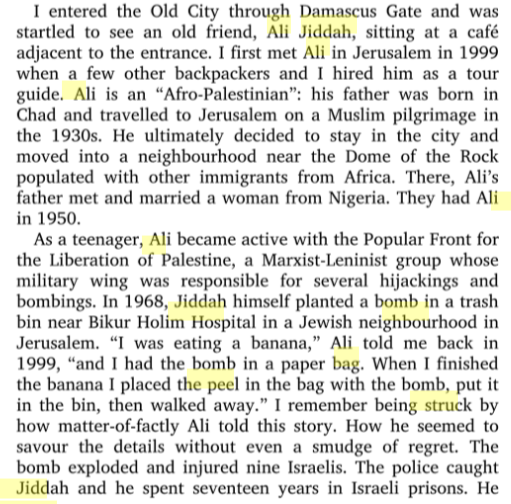 He is a terrorist. He is not a “Palestinian” in any real sense. And now he wants to raise money:

I am Ali Jiddah, an Afro Palestinian, born in the old city of Jerusalem at the African quarter. In 1968, I was sentenced to serve 20 years in person for being active in the Palestinian national struggle. My sentence: 20 years, of which I served 17 years.
Six years ago, I began to suffer from diabetes. One evening, while coming back from a lecture, I fell down and was totally paralyzed for 23 days. After passing a surgical operation, I managed to stand up on my feet. But today, I am disabled, largely unable to use my right side.
Since my liberation from prison, I have had a serious problem with the Israeli national insurance. After leaving prison, I said that I wouldn’t pay a penny toward the occupation. 9 months ago, I was sent to a trial and was sentenced to 8 months imprisonment for not paying the debt. Some of my friends in France raised a campaign and donation. They also sent me some money so that my lawyer could negotiate with the Israeli government. He was able to extend my window for paying the debt.
As of this writing, I have 12 days left to pay the money I owe to the Israeli authorities. I have already paid 31k shekels ($8060). I still have to pay 37k ($9620) more.
In addition to imprisonment, I’m not allowed to get the medical treatment that I need until the money is paid. So I am calling you for solidarity and humanitarian air. Any humble donations will be deeply appreciated by me.

Terrorist Ali Jiddah is a deadbeat who made the conscious decision not to pay for Israeli medical insurance – and now he is whining that he has to suffer the consequences. He is raising money for other people to pay the insurance debt that he himself refused to pay for over 30 years.

Ironically, he wants Israeli medical care after placing a bomb near a hospital.

Ali Jiddah was working as recently as April as an anti-Israel tour guide, when ISM wrote a loving article about him pretending that he injured 9 “Israeli soldiers.”

No, they were civilians, and Ali Jiddah admits that. One of the reasons he felt he had to join a terror group is because Jews in 1968 would go to their newly-accessible holy places and sing and dance in happiness: “the way Israeli civilians used to behave with us – I remember that at that time, they used to come in groups on the streets of the Old City, dancing, singing in a very arrogant way. I felt I was losing my dignity, my personal dignity and my national dignity.”

That is why he decided to bomb them.

Marc Lamont Hill considers raising money for terrorist Ali Jiddah to be a just cause.