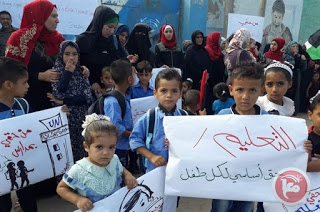 A family from Deir al-Balah in Gaza is protesting a UNRWA decision not to allow 45 children from their family to attend UNRWA schools.

UNRWA has been educating the al-Aqra family’s children for free since the 1950s, but now does not want to accept them – because they are not descendants of refugees.

The family admits this, because it says that it donated much of the land for the UNRWA camp in the 1950s. Which means that the family always lived in Gaza.

And while UNRWA, prompted from its budget woes, might now have incentive to find ways to cut services to those who never deserved them to begin with, by default UNRWA has always allowed non-refugees to take advantage of its services, because it didn’t want to cause a scene.

Here is a fascinating summary of what happened in the West Bank camp of Jalazon from the 1950s through 1968:


The administrative decision to replace the refugees’ flimsy tents with more permanent housing and to attach a plot of land to each hut succeeded in turning most of the camps into permanent urban or suburban quarters within a decade. By the 1960s, this process had run its course: The camp-dwellers had built up their plots and become the de facto owners of real estate, which they sold freely on the housing market. The project was so successful that UNRWA rapidly lost control of its own camps, occasionally making feeble but unsuccessful efforts to require residents to seek its permission for the sale of homes. By the end of the 1960s, UNRWA ceased to intervene in sales of houses.

Even in the 1960s, the camp population did not exclusively comprise the original 1948 refugees; there was a continuous stream of new arrivals. Data from a 1968 study of the Jalazon refugee camp, situated north of Ramallah in the West Bank, showed half the camp’s households arrived from 1950 onward. Some people moved from outlying camps to ones situated close to a larger city in order to improve their chances of employment, but most of the newcomers, while officially designated as refugees, had never been in a camp. They typically had been living in towns and their circumstances had changed. Some had lost their livelihood, others had grown old and weak or had no one to take care of them. They moved into a camp because there were advantages to be gained: They paid no rent and no municipal taxes and their water supply and sanitation were free. While all designated as refugees had access to UNRWA services, the camp-dwellers were better placed to make proper use of them. Most health clinics, for instance, were located in camps, and their free services were available mainly to the inhabitants. Monthly food rations, which the heads of refugee households had to collect personally, were distributed in camps. From 1955 onward, the plots of land became an added inducement to move into camps. As a result, between 1951 and 1967, the camp population in the West Bank grew by two thirds, from 94,000 to 144,000, while the total West Bank population grew by only 12 percent—from 768,000 in 1951 to 871,000 in 1966.

It is well-known that poor people in the West Bank and Gaza would pretend to be “refugees” in order to gain free services from UNRWA, and UNRWA gave up on its basic responsibility to count and keep track of residents and real refugees, as the camp residents resisted any attempt at a census and the population kept growing by attracting non-refugees.

This is just one more example of how UNRWA abdicated its original mandate to help real refugees and to reintegrate them into the Arab world, and instead it has become a huge welfare operation for Palestinians, whether they ever lived in today’s Israel or not.