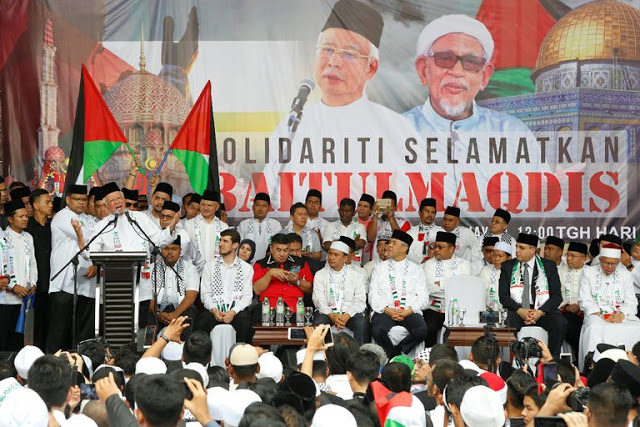 From The New York Times:

A protest in Malaysia against President Trump’s decision to designate Jerusalem the capital of Israel brought together political foes on Friday, illustrating how solidarity with Palestinians has united disparate forces in the Muslim world.

Prime Minister Najib Razak headlined a rally of more than 1,000 people in the Putra Mosque compound in Putrajaya, the country’s administrative capital.

Also in attendance were former Prime Minister Mahathir Mohamad, the 92-year-old opposition leader, who has led a campaign to oust the scandal-plagued Mr. Najib, his former protégé, and Khalil Abdul Hadi, the head of the youth wing of the country’s main Islamic party. Mr. Mahathir joined a prayer service at the Putra Mosque, along with other politicians.

“Today, regardless of our political beliefs, we gather to show that as Muslims in Malaysia we are united in opposing Jerusalem as Israel’s capital,” Mr. Najib said Friday.

“There are 1.6 billion Muslims,” Mr. Najib said at the Malaysian rally, to vigorous applause. “There are only 13 million Jews. It does not make sense if 1.6 billion lose to the Jews. If we don’t unite, we will be looked down upon.”

That is honor./shame in a perfect little nutshell. It shows that the issue isn’t Israel or Jerusalem or Palestinians – it is Muslims losing to the Jews.

And the prime minister’s political opponents are even more antisemitic:

Lawyer-cum-activist Azhar Harun has suggested that Prime Minister Najib Razak is wrong in the way he is looking at the issue of Palestine and Jerusalem, following comments made at the “rally for Jerusalem” in Putrajaya yesterday.Firstly, the 1.6 billion has never lost to the 13 million. The 1.6 billion have lost to themselves. They are busy trying to kill each other, whether figuratively or even literally.
“Secondly, and more importantly, many among the 1.6 billion are absolute hypocrites. They lack the absolute and sincere willingness to free Palestine and the Palestinians from the clutch of the 13 million,” Azhar said.
He added that there has been no proper plan, if any, from Muslim leaders and nations other than making fiery speeches.
Azhar then asked Najib to accept the fact that social media tools, such as Twitter and Facebook, through which he has “voiced his disdain against the 13 million”, is owned by the 13 million.
He also made the distinction of how the Jews now hold economic power and indirectly, political power, including among Muslim leaders.
“They, themselves, rely on the Jews and the friends of the Jews, to make money and to pursue their selfish agenda. They lack altruism,” he said.
Azhar explained how the Jews had plotted their way back from the “pogrom and holocaust” to persevere and eventually gain “world dominance”.
“They did that, first by gaining control of the economy through the financial system, international trade, properties and the world’s essential productions.
“Then, with the wealth that they created, and the essential services that they excel in and even monopolise, they made themselves indespensable to everything that moves in this world, including politicians who were too eager to pursue their own agenda, even at the expense of the Palestinian cause.
“With that, they become an absolute necessity. With that they control the politicians and the politics,” he said
Azhad added that there were no fiery speeches or “sad poems” involved in the Jews’ efforts.
“They had a plan. They worked to execute that plan quietly. And that is why, the 1.6 billion ‘lost’ the plot. And they ‘lost’ to the 13 million.”

The further Muslims are from Israel (and therefore the Western media limelight), the more free they are to be public about their antisemitism. But make no mistake – deep down, the self-loathing and shame that came from weak, lowly Jews defeating the Muslims to gain Israel is the driving force behind all the political moves of the Muslim world towards Israel, and Palestinians are merely pawns.