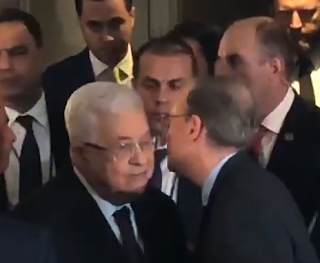 Second, notice how Abbas is protected by his handlers. He  looks like a tottering old man who has no idea what he is doing, not at all like a national leader.

Third, Jeremy Ben Ami of J-Street – who is obviously not a reporter – was given a seat of honor for the meeting, and Saeb Erekat led Abbas to Ben-Ami so they could kiss. It is telling that to Abbas, the media is the enemy – and J-Street is his friend.

And why not? There is no daylight between the positions of J-Street and Abbas, and Ben Ami has visited Abbas in Ramallah several times a year. Chances are that he is considered a strategist for Abbas.

You can be sure that J-Street won’t be saying anything critical about Mahmoud Abbas’ autocracy and the lack of freedoms under his rule. Because they aren’t liberal – they support the worst dictators if those dictators share their hate for the democratically elected government of the Jewish state.