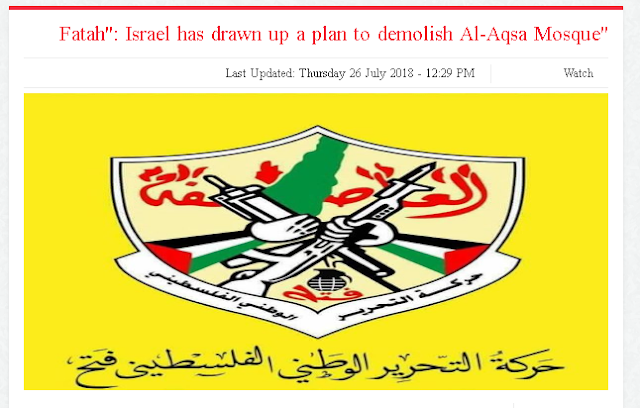 From the official Fatah news site:

The Fatah movement confirmed that Israel has prepared and has been implementing a plan to demolish Al-Aqsa Mosque through continuous excavations under Al-Aqsa Mosque and tampering with its foundations and weakening it to make it a matter of time.

Spokesman for the Fatah movement, Osama al-Qawasmi, said in a press statement that the fall of a stone two days ago from the Islamic Wall of Buraq is a dangerous indication of what is happening in Al-Aqsa mosque and its surroundings. “We declare and affirm that the space of Al-Aqsa Mosque, above and below ground, and Jews have no right to it. What they do in the courtyard daily and continuous excavations underground  is a crime against all religions, a blatant violation of the Islamic religion, and the promotion and encouragement of extremism and blind religious fanaticism and malicious planning by the Government of Israel to destroy any possibility of coexistence in the region.

Al-Qawasmi stressed that all Jerusalem is a purely Arab Palestinian state and that there is no peace or stability without an end to its occupation by Israel.

I recall Islamic clerics routinely making the charge that Israel has plans to demolish Al Aqsa, but I do not remember Fatah – the political party headed by Mahmoud Abbas – ever saying this before 2018. But this is the second time I have seen that al-Qawasmi has made this absurd claim – a claim that is pure incitement for Muslims to “do whatever we can to defend Jerusalem” and al Aqsa as Mahmoud Abbas himself said shortly before the car and knife intifada of 2015.

Claiming that Jews are destroying Al Aqsa is a reliable way to get Palestinian Muslims to riot and attack Israeli Jews, and it has been since 1920. It cannot be regarded as anything other than hate speech and incitement.