Al Resalah reports that Mahmoud Abbas is bracing for the “Deal of the Century” and how to combat it. It says that he is preparing for the collapse of the Palestinian Authority.

It also says that Abbas is planning to spend more time outside Ramallah and at his huge house near Amman so he can coordinate better with Jordan’s King Abdullah.

Abbas has a huge house in Jordan? Yes, he does. He has as many as four properties in Jordan, including a home he paid more than 2 million Jordanian dinars, about $3 million dollars, in 2011. The home is in the Abdoun district of Amman. 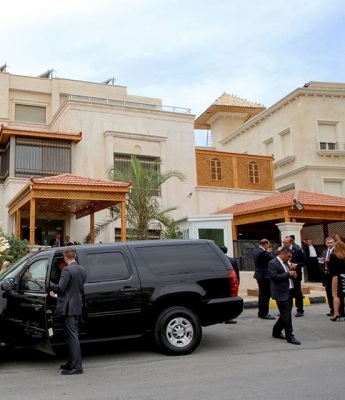 The PA president, and his sons, hold Jordanian passports and citizenship allowing them to purchase real estate in Jordan without any red tape that foreigners usually have to go through. as far as I know, he is still a Jordanian citizen.

Abbas held meetings with John Kerry in his Jordanian villa during the Obama administration.

Mahmoud Abbas likes to style himself as the President of the State of Palestine. How many world leaders are citizens of other countries?