Dr. Jamal Salsa  writes in Al Watan Voice that the Maccabees were just Jewish Palestinians fighting for their religious rights.

We learn from this Arab scholar (I looked him up, he is a dentist) that the Jews were Bedouins who moved from one place to another and lived in tents, while the Palestinian people were more civilized and lived in houses.

When the press reports on Neturei Karta “rabbis” waving the Palestinian flag, accoding to this nutcase, it is the embodiment of the divine covenant of Abraham, and in respect of these concepts and the law, who sought to live in peace with the “Kingdom of the Palestinians.”

He ends off by saying “The bottom line is that Palestine existed before the waters of the sea knew their waves, and before the moon went into its orbit.”

So, yes, he says that Palestine has existed for several billion years.

Which brings to mind this classic, originally from Latma: 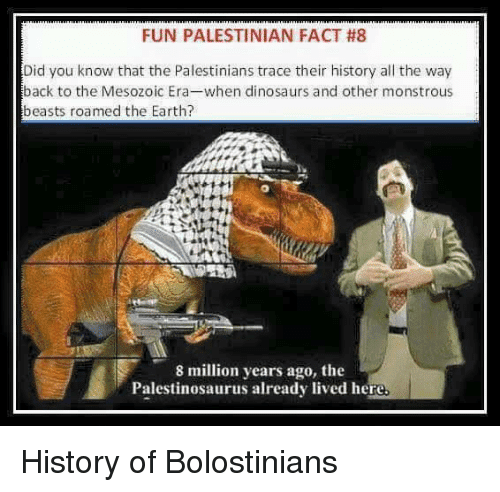