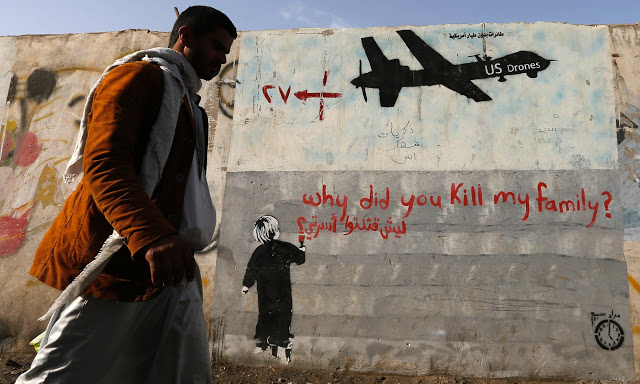 In a 2013 speech about the US air wars in the Middle East, President Obama said, “Before any strike is taken, there must be near-certainty that no civilians will be killed or injured — the highest standard we can set.”

Jeffrey Goldberg once interviewed CIA director John Brennan about President Obama’s philosophy on airstrikes and drone strikes in various warsa and he echoed Obama’s words. “The president requires near-certainty of no collateral damage. But if he believes it is necessary to act, he doesn’t hesitate.”

Indeed, when the US released reports of people killed by airstrikes in July 2016 it claimed an amazing ratio of 2581 combatants and only 116 non-combatants killed in Pakistan, Yemen and Africa, although it did not release figures from Iraq, Syria or Afghanistan.

These numbers, if true, would be an astonishing ratio of combatants to non-combatants.

Too bad that the US military is lying and Obama was responsible for thousands of civilian deaths that were never admitted.

The New York Times had a major story last week about civilian casualties in the war against ISIS, and it found over a lengthy investigation that showed:


We found that one in five of the coalition strikes we identified resulted in civilian death, a rate more than 31 times that acknowledged by the coalition. It is at such a distance from official claims that, in terms of civilian deaths, this may be the least transparent war in recent American history.

And in Afghanistan? Another report from 2015 found:


Drone strikes conducted by the United States during a 5-month-long campaign in Afghanistan caused the deaths of unintended targets nearly nine out of ten times, leaked intelligence documents suggest.

A Guardian report once found 1,147 people killed as the US was targeting only 41 men.

The New York Times in 2015 reported “Every independent investigation of the strikes has found far more civilian casualties than administration officials admit. Gradually, it has become clear that when operators in Nevada fire missiles into remote tribal territories on the other side of the world, they often do not know who they are killing, but are making an imperfect best guess.”

The Military Times once found that there were thousands of US airstrikes that were never even reported to begin with, let alone their casualty counts!

The Intercept, examining a major document leak last year, said (as quoted in The Atlantic):


The documents show that the military designated people it killed in targeted strikes as EKIA—“enemy killed in action”—even if they were not the intended targets of the strike. Unless evidence posthumously emerged to prove the males killed were not terrorists or “unlawful enemy combatants,” EKIA remained their designation, according to the source. That process, he said, “is insane. But we’ve made ourselves comfortable with that. The intelligence community, JSOC, the CIA, and everybody that helps support and prop up these programs, they’re comfortable with that idea.”
The source described official U.S. government statements minimizing the number of civilian casualties inflicted by drone strikes as “exaggerating at best, if not outright lies.”

There are major takeaways from this.

One is that the US claims under the Obama administration of exceedingly few civilian casualties from airstrikes are simply lies.

Two is that the administration, which promised transparency, is anything but transparent on this topic.

When John Kerry derided Israel’s performance in the last Gaza war by sarcastically calling Israeli airstrikes that killed civilians “a helluva pinpoint operation,” he probably knew quite well that Israel’s ratio of terrorist to civilian dead was at least as good as the US ratio. Which tells you about the intellectual honesty of John Kerry.

It is abundantly clear that the quality of Israel’s transparency and investigations after each airstrike far exceeds that of the US even under Obama’s restrictive rules on airstrikes. And it looks like the actual ratios of combatants to non-combatants is far better for Israel, since Israel never counts the families of terrorists killed in each airstrike as being combatants – and the US does!

Keep in mind that there is no evidence that the US is breaking international law guidelines in these cases. One is allowed to use the best intelligence one has in determining a target and likely collateral damage.

But isn’t it funny that there is so much less attention paid on US airstrikes over years of fighting in multiple theatres than there has been on relatively short wars in Gaza? How there aren’t any major noisy campaigns about US “war crimes” from NGOs?

The hypocrisy and double standards are, as usual, stunning. And they can only be explained if one considers the Jewish state to be uniquely evil before the first investigation is