TOP NEWS
http://elderofziyon.blogspot.com/2017/11/linda-sarsours-white-knights-max.html
By Petra Marquardt-Bigman
It’s terrible. Every morning Linda Sarsour wakes up – and because she has apparently set Google alerts for her name, she wakes up to “a new headline, a new google alert.”  She finds it “exhausting,” “so damn exhausting.” Maybe cancel the Google alerts? Or maybe grow up and accept that newspapers have op-eds and that not every op-ed writer falls for your hypocrisy and bigotry??? 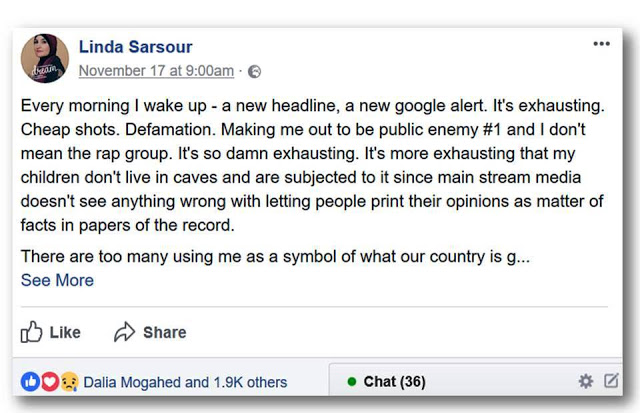 But here’s the good news, dear Linda Sarsour: in the past few days, three sort of well-known guys came to your defense. Among those heroes was your fellow-Israel-hater – and award-winning antisemite – Max Blumenthal, who happily joinedso many of your wonderful fans in denigrating the ADL’s Jonathan Greenblatt, who had the temerity to doubt your absolutely FABULOUS credentials as an antisemitism expert. After all, the expertise you get from learning by doing is unbeatable, isn’t it…
And of course you love it when your fans strike back and tell Greenblatt that compared to you, he and his organization are just utterly clueless about antisemitism. I mean, the ADL has been fighting antisemitism, racism and bigotry for a century, but really, that means absolutely nothing, nothing at all if they can’t see that there’s no antisemitism expert as brilliant as you are, right? 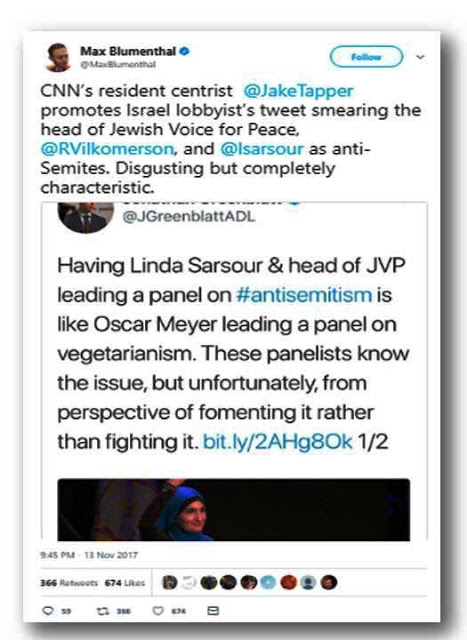 Indeed, we should all remember that you never really liked the ADL. For example, you had a big problemwith the ADL’s campaign against Hamas back in the summer of 2014; indeed, you condemned the ADL for “inciting hate here in the US” with this campaign. Absolutely right – why oh why should anyone hate Hamas??? 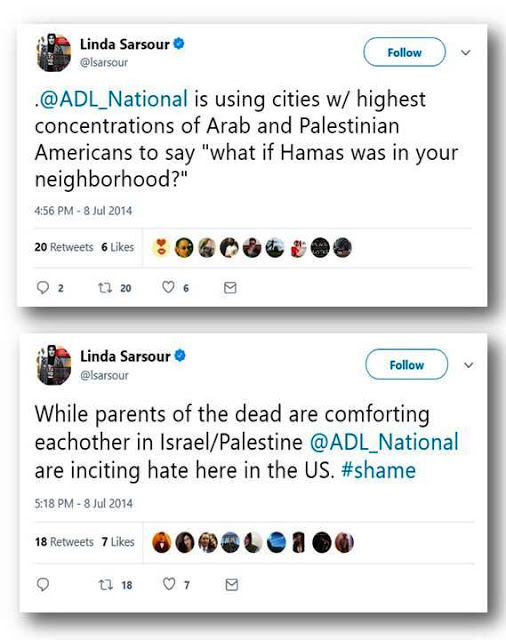 And naturally, dear Linda Sarsour, you were appalled [archived version doesn’t have link] when the ADL’s Abraham Foxman condemnedthe kidnapping and murder of three teenaged Israeli students by Hamas terrorists: “The ADL should be the PDL (Pro Defamation League) – defaming Palestinians. Shame. Shame.” 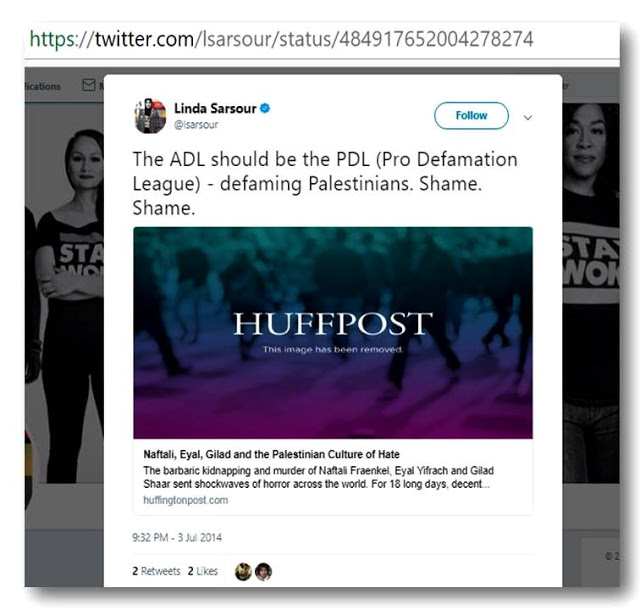 Well, dear Linda Sarsour, there’s no doubt that Hamas fan Max Blumenthal fully agrees with you on all these issues.
But let’s have a quick look at the other two heroes who came to your defense. Admittedly, David Duke was a bit lukewarm, comparingyou to a broken clock that is right twice a day… 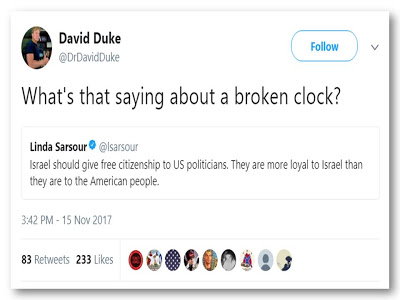 But hey, I think David Duke and you could find a lot of common ground when it comes to the ADL – he would surely LOVE your witticism about the “Pro Defamation League” given that the ADL has describedhim as “perhaps America’s most well-known racist and anti-Semite”…
And let’s not forget that alt-rightist Richard Spencer also came to your defense – indeed, given your complaints about how exhausting you find it to get criticism, you’ll surely appreciate his thoughtsabout why you are so terribly unfairly criticized. 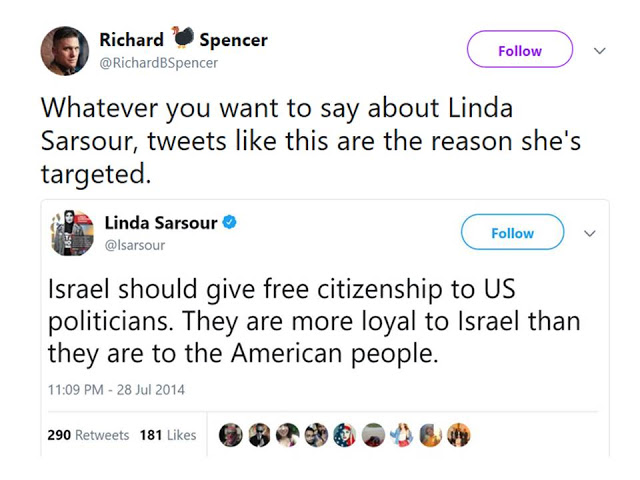 Mea culpa, mea culpa is all I can say: I’m afraid I was the first one to highlightthis tweet of yours, along with a whole lot of similar ones…
But in any case, there can be little doubt that also Richard Spencer would just LOVE your “Pro Defamation League” quip – can you imagine that the evil ADL has accused him of trying “to mainstream racism and anti-Semitism”???
You see, the ADL isn’t just defaming Palestinians – they’re also defaming the likes of David Duke and Richard Spencer, and of course, worst of all, they’re defaming you, dear Linda Sarsour!!! But isn’t it a consolation that you are in such great company???