Linda Sarsour wrote a book and she includes some notable anti-Israel lies.

No land was “stolen” in 1948 except by Egypt and especially Jordan. Arabs tried to destroy Israel before it existed – they started the war on Jews in 1947; the Jews refusal to die is not theft of land. 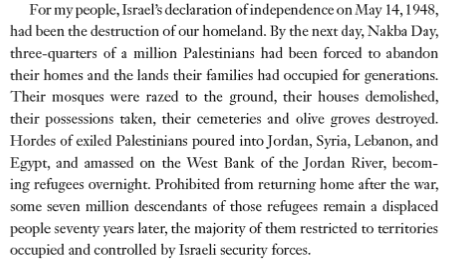 Sarsour tries to imply that Israel expelled three quarters of a million people in a single day, although she left the language ambiguous enough to tell her fans what they want to hear but to allow an interpretation of including all the Arabs who fled up until then. Even so, in May 1948 many of the Arabs who eventually left were still in their homes.

The Hagana’s truce terms stipulated that Arabs were expected to “carry on their work as equal and free citizens of Haifa.” In its Arabic-language broadcasts and communications, the Hagana consistently articulated the same message. On April 22, at the height of the fighting, it distributed a circular noting its ongoing campaign to clear the town of all “criminal foreign bands” so as to allow the restoration of “peace and security and good neighborly relations among all of the town’s inhabitants.” The following day, a Hagana broadcast asserted that “the Jews did and do still believe that it is in the real interests of Haifa for its citizens to go on with their work and to ensure that normal conditions are restored to the city.”

On April 24, a Hagana radio broadcast declared: “Arabs, we do not wish to harm you. Like you, we only want to live in peace. . . . If the Jews and [the] Arabs cooperate, no power in the world will ever attack our country or ignore our rights.” Two days later, informing its Arab listeners that “Haifa has returned to normal,” the Hagana reported that “between 15,000 and 20,000 Arabs had expressed their willingness to remain in the city,” that “Arab employees had been appointed to key posts,” and that Arabs had been given “part of the corn, flour, and rice intended for the Jews in Haifa.” And on April 27, the Hagana distributed a leaflet urging the fleeing Arab populace to return home: “Peace and order reign supreme across the town and every resident can return to his free life and resume his regular work in peace and security.”

That these were not hollow words was evidenced by, inter alia, the special dispensation given to Jewish bakers by the Haifa rabbinate to bake bread during the Passover holiday for distribution among the Arabs, and by the April 23 decision of the joint Jewish-Arab Committee for the Restoration of Life to Normalcy to dispatch two of its members to inform women, children, and the elderly that they could return home. In a May 6 fact-finding report to the Jewish Agency executive (the effective government of Jewish Palestine), Golda Meir told her colleagues that while “we will not go to Acre or Nazareth to return the Arabs [to Haifa] . . . our behavior should be such that if it were to encourage them to return—they would be welcome; we should not mistreat the Arabs so as to deter them from returning.”

The sincerity of the Jewish position is attested as well by reports from the U.S. consulate in Haifa. Thus, on April 25, after the fighting was over, Vice Consul Aubrey Lippincott cabled Washington that the “Jews hope poverty will cause laborers [to] return [to] Haifa as many are already doing despite Arab attempts [to] persuade them [to] keep out.” On April 29, according to Lippincott, even Farid Saad of the National Committee was saying that Jewish leaders had “organized a large propaganda campaign to persuade [the] Arabs to return.” Similarly, the British district superintendent of police reported on April 26 that “every effort is being made by the Jews to persuade the Arab populace to stay and carry on with their normal lives, to get their shops and businesses open, and to be assured that their lives and interests will be safe.” Several more reports in the same vein were sent by British authorities in Palestine to their superiors in London.

The casual reader would not realize how incredible the bolded section is. Religious Jews are not allowed to own or even see leavened products on Passover; to have a rabbinical ruling that Jewish bakers must bake bread for Arabs on Passover itself is stunning.

The truth of Arab flight is not at all what Sarsour and the Arabs say it is. But her lies don’t end there.

“Their mosques were razed to the ground?” There were a few that were damaged and destroyed in the fighting, but to say that Israel deliberately destroyed most or all of the mosques is out and out slander.

Even according to UNRWA, the majority of Palestinian “refugees” today are not in the territories. About 2.2 million UNRWA “refugees” are, the rest are in Jordan (2 million), Syria and Lebanon (officially about 500,000 each,) plus millions who live in other Arab countries or the West.

Palestinians in Arab countries (save most in Jordan) remain stateless, 71 years after the “nakba.” Somehow, this “civil rights leader” doesn’t want to mention that her fellow Arabs have treated their Palestinian “guests” far worse than Israel has – official apartheid against them in Lebanon, thousands killed in Syria in recent years and in Jordan in 1970, effectively illegal in Egypt. Lies of omission are just as bad as explicit lies.

Sarsour no doubt was raised on these lies. But when you write a book, you should do fact checks. Sarsour doesn’t care about facts.