TOP NEWS
http://elderofziyon.blogspot.com/2017/07/legitimizing-temple-denial-in-london.html
By Petra Marquardt-Bigman
British Islamists are eagerly anticipating the “biggest-ever Palestine event in Europe”: a “Palestine Expo” that “will be held at the Queen Elizabeth II Conference Centre in Westminster [London] on 8 and 9 July.” The event is organized by “Friends of Al-Aqsa” (FOA); the group claims to be “a UK based non-profit making NGO concerned with defending the human rights of Palestinians and protecting the sacred al-Aqsa Sanctuary in Jerusalem.” A more honest description would have to mention that FOA founder and chair Ismail Patel is an ardent admirer of the terror group Hamas and that FOA likes to promote Holocaust deniers and Jew-haters. Moreover, FOA’s openly declared “aims and objectives” include “Emphasising the significance and the centrality of the al-Aqsa Mosque to the Islamic faith and the Muslim identity and re-affirming the Muslim historic and religious rights to the area” – and in case you’re wondering what exactly “the area” refers to, FOA is again rather honest about it: as they explain in their #HandsOffAlAqsa campaign,
“There is a common misconception that Masjid al-Aqsa refers specifically to the black/grey domed masjid within the al-Aqsa Sanctuary, however this is incorrect. Allah (swt) reminds us in the Holy Qur’an that He has blessed the land for us therefore according to Islamic teachings, ALL the buildings within al-Aqsa Sanctuary and the entirety of the land are sacred right down to every single grain of sand within it and when we refer to ‘Masjid al-Aqsa’ it is not to any of the specific buildings upon the land, but rather, the land itself upon which the Dome of the Rock and the black/grey domed masjid stand.”
Islamic supremacism in its by now all too familiar ruthlessness – after all, what FOA is doing is not so different from what the Taliban and ISIS have done when they destroyed ancient monuments of non-Islamic civilizations in areas under their control. True, the Jewish Temple was already destroyed when the jihadi armies led by the successors of Islam’s founder conquered Jerusalem and quickly moved to Islamify the site that remains Judaism’s most holiest and is also important to Christians. So what is left for Muslim supremacists to destroy on the Temple Mount doesn’t require explosives, but just the kind of ruthless propaganda and incitement that FOA employs in its despicable efforts to erase the Jewish history of the site.
Visitors of FOA’s “Palestine Expo” in London will apparently get a chance to enjoy this vile propaganda in the “Knowledge Village” where they can see “a virtual Al-Aqsa and learn all about the history of Al-Aqsa.” It’s unclear who finances the event, since the link for “Sponsors and Exhibitors” only leads to a PDF brochure that seeks sponsors and exhibitors, while the groups listed as “Supporters” include mostly anti-Israel activists and unions whose leaders have particular problems with the existence of the world’s only Jewish state.
On social media, FOA’s Twitter account has just some 19K followers; their Instagram account has some 31K followers, but their Facebook page has more than 500K “Likes” and followers.
Needless to say, FOA uses social media to incite against Jews and Israel with blatant lies and demonization, as illustrated in the following screenshots from Instagram, Facebook, and Twitter; note the antisemitic comments of FOA’s followers. 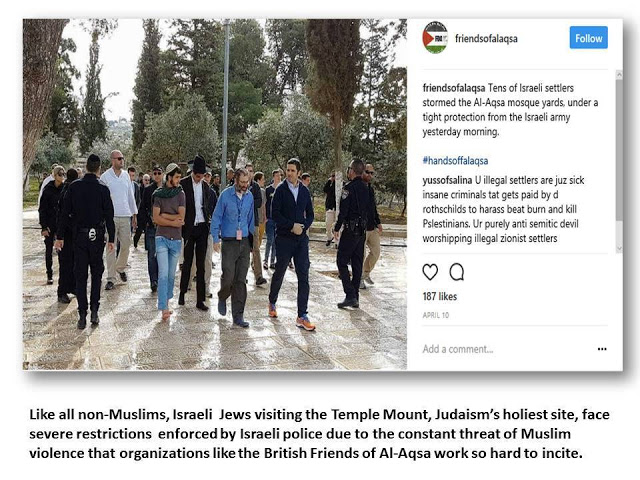 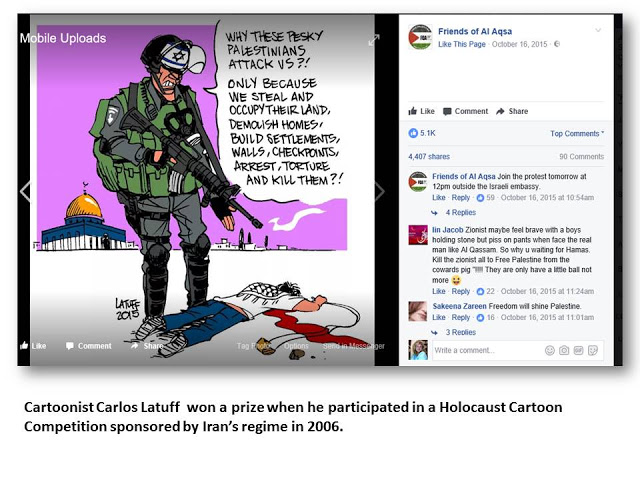 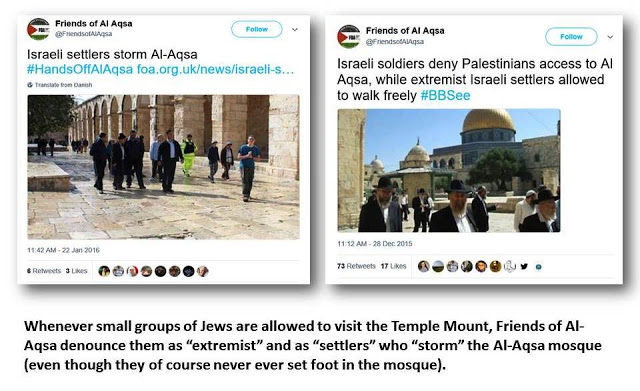 As I have repeatedly noted, the pernicious libel that Jews want to damage the Al-Aqsa mosque was first invented in the 1920s by Haj Amin al Husseini, the Mufti of Jerusalem, who later gained notoriety as a Nazi collaborator; his successors now operate freely in Britain and are organizing a major event in a prominent location in central London. Anyone who participates in this event and supports it by visiting can proudly claim to have contributed to promoting the legacy of a man who was also once described as “Hitler of the Holy Land.” And as it happens, quite a few of the preachers who speak at Al-Aqsa and lead prayers there have fantasies that are rather Hitleresque – so let’s conclude with just one of the more recent examples. It’s not hard to imagine that the British Friends of Al-Aqsa greatly enjoy this kind of sermons privately, though for some reason, they’re apparently reluctant to share them with their fans…