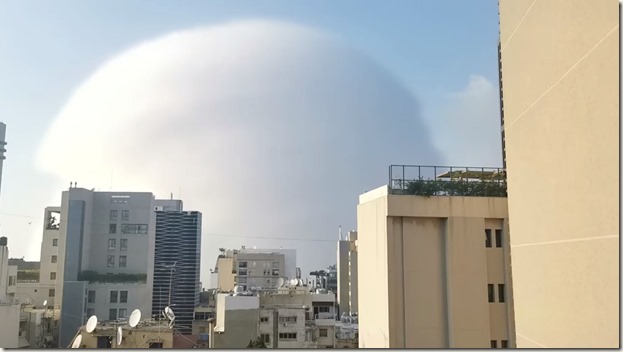 “I am sending an urgent appeal to all countries that are friends and brothers and love Lebanon, to stand by its side and help us treat these deep wounds,” he said in a televised address.

When Lebanese officials say “friendly countries” they mean the entire world – except for Israel.

Only a few weeks ago, Makram Rabah, a professor at American University of Beirut, told Anadolu Agency, “Lebanon is punished currently due to the policies of Gebran Bassil (former foreign minister) and Hezbollah,” stressing that Lebanon needs to maintain good ties with the Arab states and the international community “except for Israel.”

At the same time  Lebanon’s Maronite leader said, “Lebanon was open to all countries, east and west, except Israel.”

Also last  month Hezbollah leader Hassan Nasrallah said that his party is “open to help from any country in the world except for Israel.”

Lebanon recently dropped hiring forensics accounting firm Kroll because it has an office in Israel.

Lebanon’s hate for Israel, even as if allows its country to be devastated by Hezbollah and Iran, is counterproductive to the point of absurdity. In 2017, hours before its planned premiere, “Wonder Woman” was banned in Lebanon simply because its star is Israeli.

So when Diab said “friendly countries” it was very clear that he knew that Israel offered help and he was rejecting it. Given that Israeli disaster relief experts could have been on the ground in Lebanon hours before any other country, that means that he chose to let some potential survivors die rather than be put in a position where he accepts help from Israel.