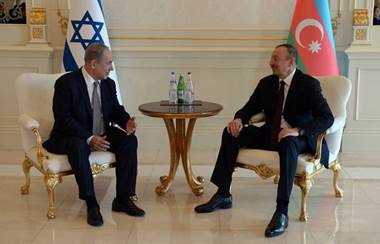 As far as I can tell, no mainstream media outlets mentioned Prime Minister Netanyahu’s visit to Azerbaijan on Tuesday or his visit to Kazakhstan today.

This is probably because the media is invested in the idea of Muslims and Israeli Jews hating each other, with the subtext that Zionist Jewish invaders have taken over historically Muslim lands (and that Jews lived peacefully in Arab lands before Zionism ruined everything.)

And this is a narrative that is not accurate.

As Netanyahu said in his speech with Azerbaijani President Aliyev:

But I think there’s something else that’s unique about this relationship: Israel is the Jewish state, it’s a Jewish state. Azerbaijan is a Muslim state, predominantly Muslim population. Here you have an example of Muslims and Jews working together to secure a better future for both of us. And it’s an example that shines against the background of intolerance and lack of acceptance and mutual respect.

In fact, the mutual respect that you show here, the attitude that you’ve shown to Jews in Azerbaijan over the years, has fostered this very strong bond of sympathy and admiration for Azerbaijan, first of all with the 70 thousand Jews living in Israel who are from Azerbaijan. It’s a human bridge, but also something that we can show the world. You know, the world sees so much intolerance, so much darkness, and here is an example of what relations can be and should be between Muslims and Jews everywhere.

I have to tell you, Mr. President, I said this privately but I’m telling you that there is a change that we see in many parts of the Muslim world and specifically the Arab world. But I think if they want to see what the future could be, come to Azerbaijan and see the friendship and the partnership between Israel and Azerbaijan. It’s not only good for both our countries and both our peoples; I think it’s good for the region and good for the world. So I want to thank you again for welcoming us in the middle of the day. We come day and night. And you are, of course, invited to come to Israel. I hope to receive you there at the appropriate time, when it’s convenient for you. And I want to say again how much we appreciate the friendship and hospitality that you’ve shown us. Thank you.

Iran is upset because, like the media, it wants opposition to Israel’s existence to remain a consensus Muslim position.

An Armenian website, Panorama, reported on Monday that Iran considers Netanyahu’s visit objectionable, with a top Iranian cleric, Sayed Mehdi Ghoreishi, telling reporters, “It is unacceptable when a Muslim country tries to develop ties with a perpetrator. The Azerbaijani authorities must take this into account, as it is unacceptable for the Muslim society.”

The media isn’t reflecting today’s reality of Jewish Muslim relations.  It is reflecting the desire of the extremists to make it a religious conflict.