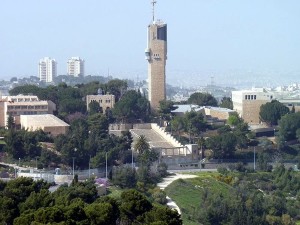 Jerusalem, October 24 – An American anti-Israel activist whose expulsion from the country was overturned by the High Court began her studies today at the Hebrew University, where her radical politics and opposition to Jewish sovereignty made her difficult to distinguish from the majority of lecturers on staff at the institution.
Lara Alqassem rode a series of successful appeals to have a deportation order canceled, despite evidence that she had led a chapter of Students for Justice in Palestine, an anti-Israel group often involved in threatening behavior toward Jews on college campuses in the US. As the fall semester launched this week, Ms. Alqassem had the mistaken impression that she would stand out, only to discover her dismissal of Jewish ties to their ancient homeland dovetails with the views of a good number of faculty at Hebrew U.
“I thought I’d be more conspicuous,” she admitted. “I did, after all, campaign on behalf of Rasmeah Odeh, who murdered two students from this same university. But apparently that’s not enough to make you stand apart from the crowd in academia these days, not even Israeli academia. I thought all the like-minded folks were at Tel Aviv University, or maybe Ben-Gurion over in Beer Sheva, but it turns out there’s no shortage of kindred spirits right here.”
Ms. Alqassem’s surprise compounded upon discovering that the anti-Zionist and anti-Jewish vibe finds a welcome home even outside the sizable population of Arabs attending Hebrew U. “At first I didn’t even expect to see Arabs, since I know Israel is a fascist Apartheid state,” she recalled. “Well, I was a little discomfited to see that’s not the case in this situation. Of course that won’t stop me from bandying about the ‘Apartheid’ label at every opportunity. I have cred to maintain.”
Some students and faculty, in fact, voiced disappointment at Ms. Alqassem’s claims in court that she had abandoned or softened her previous anti-Israel positions. “I don’t know how well she’s going to fit in here,” cautioned Fashla Sharmuta, a sophomore. “We expected a bit more courage from someone confronting the vast Jewish-controlled media in America, but there she was, pretending she doesn’t believe in boycotting Israel or its institutions anymore. I’d much rather have seen her get deported so we could continue with our narrative of the Jew- I mean Israel suppressing dissent and silencing critics, since that’s how we’re used to our supporters on campuses operating.”