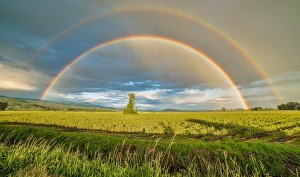 Kibbutz Keturah, July 18 – The sacred Islamic land of Palestine has made clear its existential revulsion for Jews exercising sovereignty there over the last seven decades, demonstrating its disgust with the phenomenon via such unequivocal acts as producing agricultural and horticultural bounty unprecedented in such an arid climate and lending its previously infertile areas to successful, productive cultivation, but only while Jews govern it.
The land, which supported perhaps tens of thousands of people at a time during the centuries leading up to the Zionist usurpation of its precious soil, now only houses ten million, an unmistakable sign that Palestine cannot abide Jewish control of its natural resources. Another sure indication of its displeasure features in the country attaining the unique status of the only one in the world to achieve a net increase in the number of trees over the last century.
Experts call the land’s expressions of distaste for Jewish control unmistakable. “It takes extreme situations for the soil of Palestine to react in such an extreme fashion,” explained Yessir Amafart, a Palestine Liberation Organization official. “It didn’t react this way for the Romans, Parthians, Byzantines, Rashidun Caliphs, Umayyads, Abbasids, Fatmids, Seljuks, Crusaders, Ayyubids, Mameluks, Ottomans, or British. The land is telling us something clear, and we must act accordingly.”
Arab residents of the land and neighboring areas have taken upon themselves to remedy the situation: from Gaza, daily volleys of bombs and incendiary devices travel via helium, wind, or drones travel over the border fence to set alight as much farmland and nature as possible. Arab vandals strike Jewish farms almost nightly, stealing livestock, damaging equipment, attempting to prevent the land from continuing its tantrum. In some locations, local Arabs cut down their own olive orchards and blame it on Jewish settlers, in an effort to both remedy the sacred land’s corrupted output and put pressure on the instigators of that output to leave. And throughout the country and region, numerous activists fight to reduce the number of Jews provoking the land’s abnormal activity, albeit with limited success.
In the one area Jews did leave, the Gaza Strip, activists have long worked to reverse the dangerous growth of Jewish-cultivated plants and produce. “When the Jews left in 2005 we destroyed the greenhouses they left behind,” recalled local resident Qutnoz Sbaytfeis. “Some American do-gooder philanthropist thought we might want to continue working there and making a living, but we can’t risk the land being fruitful for us after the Jews were here. It would be sacrilege.”