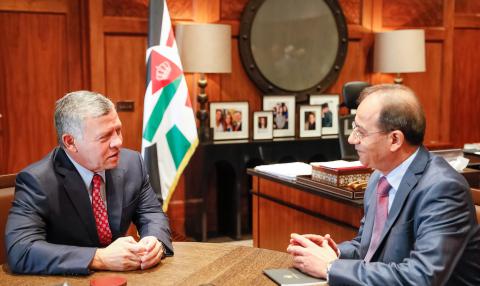 From the Petra News Agency, copied to the Jordanian embassy in Washington site, in an interview clearly meant for an American audience.


Jordan News Agency: Your Majesty, when it comes to the Palestinian issue, have there been genuine international efforts to bring the Palestinians and the Israelis back to the negotiating table?

King Abdullah: In my interactions with US President Trump and his administration, I have sensed a commitment to bolstering efforts aimed at reaching a solution that guarantees peace between the Palestinians and the Israelis, which is positive and encouraging. I expect that we will see this commitment translated into action in the near future, based on the two-state solution, which is the only way to end the conflict.

Regional issues are interconnected. Reaching just and comprehensive peace that guarantees the emergence of an independent state for the Palestinians on their national soil with East Jerusalem as its capital will, in turn, achieve security and stability for the region and its peoples. In the same vein, failure to make progress in the peace process will fuel frustration and anger among the region’s peoples and serve the agenda of extremists, who exploit the injustices perpetrated against the Palestinians and the frequent violations against Islamic and Christian holy sites in Jerusalem. We have witnessed this during the recent crisis in Jerusalem.

You will not read about this muted but definite praise for the Trump administration peacemaking efforts in the media.

But the second paragraph is more interesting, even if it is boilerplate.

Abdullah says that the lack of peace will  embolden terrorists. This is trite, and false. After all, the Island of Peace massacre occurred after Israel and Jordan’s peace treaty. Was this because of frustration at no peace – or frustration that Jewish girls can freely visit a place they couldn’t go to before?

The entire “frustration” meme is an excuse to avoid looking at the core issue: Arabs refuse to accept Israel, even if some of them re forced to pretend they do for politicl reasons. But deep down, the vast, vast majority of Arabs look at Jewish sovereign  presence in the Middle East as just as temporary as the Crusader control of Jerusalem. If they are patient, the Jews will eventually be forced out.

No one in Jordan’s schools is being taught that peace with Israel is a wonderful thing and that Israel is a full member of the region. And this is the most “moderate” of Israel’s neighbors, by far.

Moreover, if frustration over no peace leads to terror, then where are the Jewish terror attacks coming out of frustration? Israel doesn’t have peace either, right?

Abdullah’s lies don’t end there. He says that Jewish visitors to Jewish holy places are “frequent violations” against holy sites.

He says that peace cannot occur without Palestinian control over “east” Jerusalem which includes the Old City. Presumably Jews would be allowed to visit in his conception of peace. But why cannot Israel control it and let Arabs visit? If one is not an impediment to peace, why is the other?