From Kashmir Watch by By Sajjad Shaukat:

When we talk about the control of the United States and the world, there is no difference between the Khazarian Mafia, Jews and Israel. In this regard, many intellectuals like Don Allen and others reveal, “The Council on Foreign Relations (CFR)…was part of a conspiracy to gain control of both US political parties to use them as instruments…seventy-three percent of the members of the Council on Foreign Relations are Jews. There are a number of organizations that comprise the Invisible Government that runs America and the world…from behind the scenes. A Jewish group which is in control of national governments and multinational corporations promotes world government through control of the military, media, foundation grants and education including NGOs…and controls and guides the issues of the day, and thus they control most options available. They will manage the money, the land, the food, and the guns of everyone in the world.”

In the words of Congresswoman Cynthia McKinney, “It is long been clear that the pro-Israel, ultra-Zionist network have absolute control over the United States. The idea that our leaders are pursuing America’s vital national interests abroad…is a myth.”

Nevertheless, it is most surprising to note that especially since the orchestrated drama of the 9/11 attacks on the one side, Khazarian Jewish Mafia has been acting upon its evil designs by targeting the non-Zionist Americans and entire international community, while, on the other, it is, rapidly, jeopardizing its financial interests by destabilizing the global economy, which shows cognitive dissonance of the Mafia.

They really think we are so stupid as to endanger our own wealth to destabilize the world economy? We have septillions of dollars!

God, these antisemites are so stupid!

I found a variant of this article published seen months ago in some self-published site called Taste Style Mag (really!) with this headline and illustration: 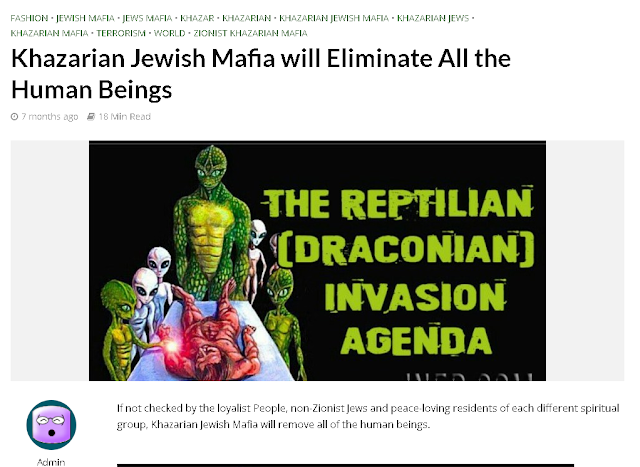 Not surprisingly, this same author has written about the “Khazarian Jewish Mafia” at Veteran’s Today.

Far Right, Far Left – the antisemitism is the same.