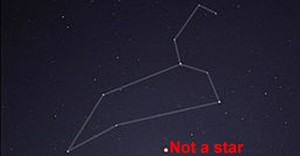 Joe, the guys are not pleased with your delusions of grandeur, and I can’t say I disagree. Aside from the fact that it’s just dangerously destabilizing to go boasting about visions of your own superiority over us, it’s not right to go describing all the “stars” you saw using that word. For the sake of accuracy, you have to refer to one of them as a planet.
We’ve all seen the night sky, and we know the brightest small objects up there aren’t just thermonuclear gas-and-plasma spheroids. Some of them are just chunks of rock or blobs of gas that reflect sunlight. Aside from the disturbing implications of your dreams for the unity and harmony of this family, if you’re going to command any respect whatsoever among us you had best start using the correct terminology. Otherwise anyone serious will know you’re not serious.
Let’s leave aside the troubled history of this family: our grandfather Isaac’s troubled relationship with his half-brother Ishmael, born of the tension between Great-Grandmother Sarah and her handmaiden Hagar; Grandpa Laban’s manipulative treatment of his sister, Grandma Rebecca; and the fraught dynamic between our father and Uncle Esau. It’s almost a given that at this point, one of us is going to be rejected as the principal heir because he’s unworthy. Your antics make you a prime candidate, and your imprecision with astronomical nomenclature certainly is no help. A planet is a planet. A star is a star.
You’re already seventeen years old. You’ve learned enough at our father’s knee to know the difference between an object that produces light and an object that merely reflects light. It’s not a difficult concept. Your insistence on calling anything up there that isn’t the sun or the moon “stars” is almost as annoying as your astounding presumption that telling all of us, in excited tones, about how you’re going to lord it over us because you foresaw it in a dream about stars wouldn’t turn every last one of us against you.
Get your act together, Joseph. Just because you’re the eldest son of Dad’s favorite wife doesn’t mean you’ve automatically secured a place of pride in this family. Look at what happened to Esau. Gone to Seir despite his lifelong efforts to kiss up to Grandpa. So stop it with your stupid dream tales. And start using proper terminology when you talk of these things. Don’t be such a philistine.