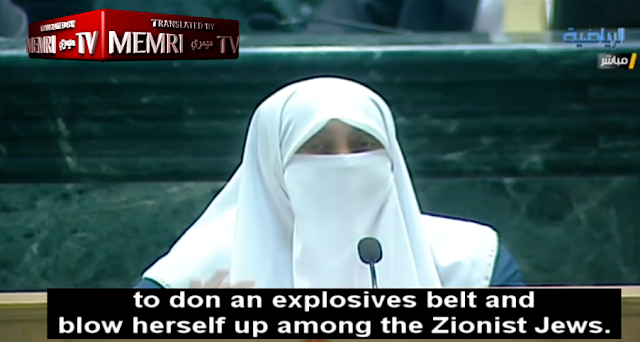 Jordanian MP Huda Etoom: My Late Mother’s Single Unfulfilled Desire Was to Blow Herself Up among the Zionist Jews pic.twitter.com/yOYoyw6Qb2

My late mother was over 80 years old….She implemented every single tradition of the Prophet of Allah.

A single desire was left in her soul: to don an explosives belt and blow herself up among the Zionist Jews.

We shall continue to feel remiss unless we are martyred on the land of Palestine, which is our number one cause, our all-consuming concern, and the right we redeem with every single drop of blood.

It was reported without comment in Jordanian media along with the rest of her speech.

Interestingly, Etoom’s speech also referred to the problem of Jordanian schools not teaching proper morality as well as a demand to ban pornographic sites from Jordan because of its moral impact on the nation.

Because she is all about morality.

One commenter on her Facebook page gently chided her, saying “We are all heart and soul with Jerusalem and Palestine but suicide was not the means to express our love for Palestine and we know that it is forbidden by law.”