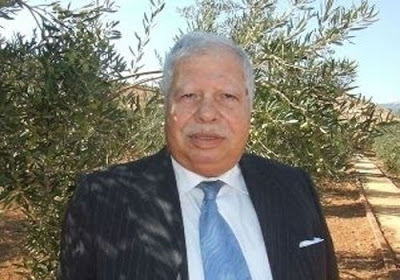 I noticed some op-eds in Ad-Dustour, a Jordanian newspaper partially owned by the Jordanian government (according to Wikipedia,) by Sufian Shawa, a lawyer.

One from May starts off with the myth that the two lines on the Israeli flag symbolize the Nile and the Euphrates, as the ambitions of Israel to fulfill the Biblical promise of the future borders of the Jewish nation. (The blue lines really symbolize the stripes on a tallit.)

But, Shawa says, Israel is going beyond these Biblical borders, and now it is stretching from the Atlantic to the Indian Ocean.

In 1999, Israel established relations with Mauritania, which borders the Atlantic Ocean. Mautiania was the third Arab state to recognize Israel after Egypt and Jordan. Israel  opened up a cancer research and treatment center there. (Shawa doesn’t mention that those relations ended in 2009 after the first Gaza war.)

Of course the visit to Israel from India’s prime minister is what caused Shawa to rail on about Israeli expansionist ambitions.

The article goes on from there:

In fact, Israel is not a state like the rest of the world, but an army … looking for a state! All the citizens of Israel are an army, either from the regular army or from the ready reserve on demand if Israeli forces think of launching an attack on any country… Israel has no international borders. In 1950, David Ben-Gurion, Israel replied: – The borders of Israel are at the place where an IDF soldier stands.
Israel, controls Europe and the United States without any doubt.

Israel is one of the goals of global Freemasonry as a goal and not a dream .. Note that Zionism was born from the womb of Freemasonry, especially the Masonry Jews and not Masonic goyim or non-Jews. The three Jewish Masonic objectives are:
1 – The establishment of the State of Israel to collect the Jews of the world in which has been achieved.
2. Rebuilding Solomon’s temple in Jerusalem on the Temple Mount on the ruins of the blessed Al-Aqsa Mosque. God forbid. This goal has not yet been achieved.
3. The establishment of the “Government of Judah” and its capital Jerusalem as the eternal capital of the Jewish people. This government rules the entire world for Jewish authority and applies Jewish law throughout the world.

More recently, Shawa wrote that about the Temple Mount:

The rabbis are the only stakeholders in controlling the children of Israel and keeping their community with the influence and control and the yellow gold that the Jews adore. …They confirm that this Temple exists only in the imagination of rabbis (David Ben Gurion), the first Prime Minister of the State of Israel. The sword and the Torah descended on the Israelites from heaven. .( Believe it or not ) ..!
The legends in the lives of Jews, which became myths; astrology and magic are one of the pillars of Jewish culture from time immemorial. Rabbis differ from the rest of the world’s clergy and they can weave legends and portray them as a reality The rabbis say that the temple of Solomon was luxurious…
We do not know the source of the gold and the great money through which our master Solomon built this strange structure. Especially since the Jews were bandits .. The tribes only know looting .. They are a people of crooks as described by the same (Torah), their holy book .. It was reported that the Jews stole the Egyptians when they left Egypt through fraud and deception And they invented a false argument and fled from Egypt under the cover of darkness and with stolen gold.
.. Their prophet orders them to steal and that their Lord helps them so and their holy book tells it … As if theft and fraud of ideals and great values ​​Hallelujah ..? This explains to us the situation of Israel in this time is an extension of the ethics of the Jews and their customs since ancient times .. They stole the land and trees and stone ..
But why do the Jews insist on the destruction of the Al-Aqsa Mosque? “The Jews firmly believe that the Temple of Solomon is located under the Al-Aqsa Mosque in Jerusalem and that this temple was destroyed by the Babylonians. They are determined that the Al-Aqsa Mosque was erected on the ruins of the Temple of Solomon without mentioning one proof of the validity of this claim. They are Jews who love life in the dark tunnels and live in the unknown.
But the slander of the Jews calls for wonder, all that they say is baseless, but they are looking for something other than the structure of Solomon. The religion of the Jews must remain secret. This is what is stated in the Protocols of the Elders of Zion – Protocol XIV….

He goes on to spin a wild theory about a holy fire that the Jews have kept with themselves throughout the millennia in order to kindle the altars of sacrifices in the Third Temple.

If this explicit antisemitism is what is being published in semi-official Jordanian media, then why would anyone be surprised that Jordanians are holding demonstrations to sever relations with Israel?