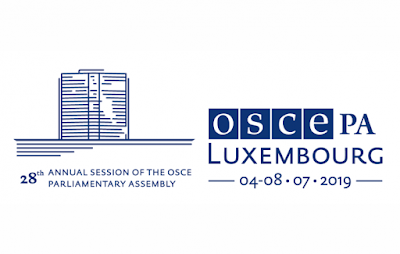 The Organization for Security and Cooperation in Europe (OSCE) is holding a conference in Luxembourg this week.

Both Israel and Jordan were invited.

But the Jordanian delegation, headed by Assistant Speaker of the House of Representatives MP Ibrahim Al-Qar’an, withdrew from the first day of the conference.

The reason? To protest against the seating of its delegation site near to an Israeli delegation!

Al-Qar’an said that his  delegation, which includes other Jordanian members of parliament, withdrew after he was surprised that the seat allocated to him was at the same table prepared for the Israeli delegation.

The Jordanians made several attempts to pressure the organizers of the conference to change the seat of the Jordanian delegation or to remove the Israeli delegation. They refused, properly.

Al-Qar’an said that despite the delegation’s keenness to participate in the conference, the principle of not sitting next to Israeli Jews “came from our principles and ethics and our noble religion that does not allow us to sit with this occupier of our holy sites.”

This puerile snub was not reported in Western media. The conference didn’t tweet about it. As is normally the case, an Arab country acting like a spoiled child is coddled and accepted. (And the stories are reported triumphantly in Arabic media.)

The only way to handle these sorts of situations is to publicly shame the nation that refuses to treat Israel as an equal, and to expel them from the organization that they are boycotting.

Sweeping it under the rug helps no one except the offender.