I mentioned last week that today was the deadline for Jordan to decide not to renew Israel’s 25 year rights to land in the Naharayim (Baquoura) and Zofar (Ghamar) areas as stipulated in the 1994 peace treaty.

Jordan’s King Abdullah announced on Twitter that he will seek not to renew the agreement. 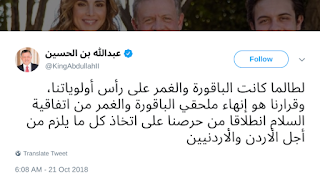 “Baqoura and Ghumar were at the top of our priorities,” the King tweeted. “Our decision is to terminate the Baquoura and Ghamar annexes from the (1994 Jordan-Israel) peace treaty out of our keenness to take all decisions that would serve Jordan and Jordanians,” said the King in his tweet.

There may be a legal wrinkle in the case of Naharayim, however.

The peace treaty explicitly recognizes that this area is privately owned by Jews:

For the purpose of this Annex the area is detailed in Appendix IV,  Recognizing that in the area which is under Jordan’s sovereignty with Israeli private land ownership rights and property interests (“Land Owners”) in the land comprising the area (“the land”).

If Jordan wants the land, it will have to pay. The fee will have to have an amount acceptable to the heirs of the owner.

Netanyahu said that he will renegotiate the agreement. This will get more interesting.