The story the Jordanians are telling us is that terrorist Ahlam Tamimi, who masterminded the Sbarro massacre, cannot be extradited to the US, because there is no treaty. The Jordanian High Court recognizes that an extradition treaty was signed with the US in 1995, but that it is null:


The Court of Cassation approved a decision taken by the Amman Court of Appeal not to extradite Jordanian citizen Ahlam Tamimi, to the US authorities.

A judicial source told Jordan News Agency, Petra that Kingdom and the United States singed [sic] an extradition treaty on March 28, 1995, but was not approved by the Jordanian parliament.

The source said that a request sent by a foreign country to concerned authorities in Jordan to extradite criminals, are not usually accepted as long as the extradition treaty is not effective.

Al Tamimi was accused of conspiring to use a weapon of mass destruction against a U.S national. (emphasis added)

The problem is that this is not true.

The extradition treaty between the US and Jordan may or may not have been approved by the Parliament, but it was signed by King Hussein.

More importantly, in 1995 Jordan did recognize the treaty. The New York Times recounts that the same treaty the Jordanian court is now saying is null, was in fact used to allow US agents onto Jordanian soil to extradite a terrorist, a Jordanian national, to the US for the World Trade Center bombing.


At 1 A.M. on Feb. 9, 1993, Federal prosecutors say, Eyad Ismoil, a Palestinian immigrant working in a grocery store in Dallas, received an urgent phone call from a boyhood friend.

A few hours later, Mr. Ismoil bought a plane ticket, and on Feb. 21, he flew to New York to join the friend, Ramzi Ahmed Yousef — the man prosecutors call the mastermind of the World Trade Center bombing. Five days later, prosecutors say, with Mr. Yousef in the passenger seat, Mr. Ismoil drove a van packed with explosives into the garage below the Trade Center.

…Using airline records, the F.B.I. discovered that Mr. Ismoil had flown to Jordan on the night of the bombing. With the help of the local police, agents tracked him to his home in a refugee camp near Jerash, about 30 miles north of Amman.

Although the F.B.I. knew his whereabouts last winter, the Americans could not arrest him until King Hussein of Jordan signed a new extradition treaty with the United States last week.

…At 2:15 P.M. yesterday, Mr. Ismoil, wearing a bright orange prison suit, was led in handcuffs into Federal District Court in lower Manhattan. The 24-year-old suspect was arraigned in five minutes before Judge Kevin Thomas Duffy on bombing and conspiracy charges. He pleaded not guilty.

While The New York Times refers to him as a Palestinian immigrant, Ismoil’s family originated in Nablus, then moved to Kuwait, where he was born. The family then resettled in Jordan in 1990 after the Iraqi invasion. Ismoil is a Jordanian national.

If the extradition treaty was in effect in 1995 to bring terrorist Ayed Ismoil to justice, why can’t it be used now to extradite the terrorist Tamimi?

If the extradition treaty was not in effect in 1995 because it was not approved by the Parliament, then why were the Jordanians able to hand Ismoil over?

In his book Relentless Pursuit: The DSS and the Manhunt for the Al-Qaeda Terrorists, Samuel M. Katz writes about how Eyad Ismoil, who drove the explosives to the World Trade Center garage, was tracked down — and extradicted to the US by Jordan.

Amazon describes Katz as an internationally recognized expert on Middle East security issues, international terrorism, military special operations and counterterrorism who has written books and articles and as served as a commentator on television networks.

On page 219, he describes the problem of extradition and how a treaty was drawn up and signed by King Hussein. There is no mention of the Jordanian Parliament being needed to approve in order for the treaty to be valid. 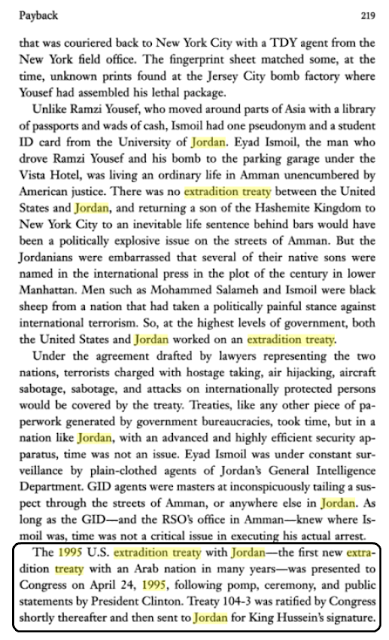 What is mentioned is that the treaty was signed into law in a ceremony in Amman a few months later. Furthermore, as the bottom of page 220 makes clear, not only was Ismoil extradited — he was handed over to US agents on Jordanian soil. 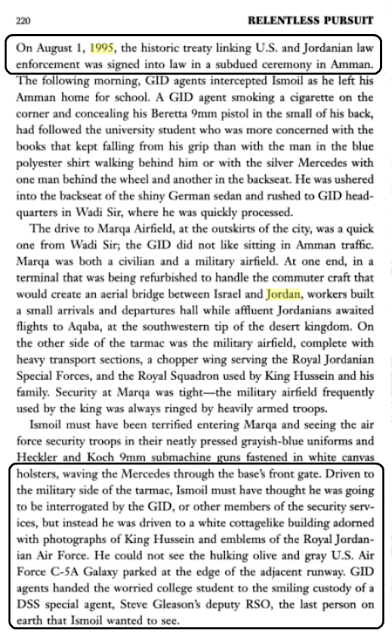 The treaty surely must have been valid in order to allow agents of a foreign country to enter Jordan and remove the suspect.

So what happened since then that makes the exptradition now impossible? In the third paragraph on page 221, Katz explains the blowback from the first ever extradition from Jordan: 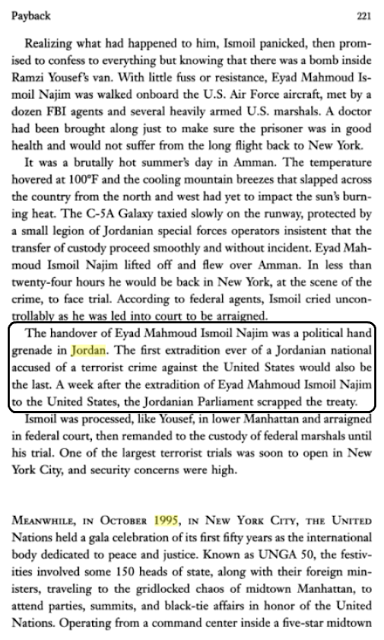 If the only reason that the extradition treaty is not effective now is because the Jordanian Parliament decided to abrogate it, then the Jordanian king, parliament and courts need to stop playing games and tell the truth about why it is refusing to hand an admitted terrorist over to the US.

Even better, Jordan could right this wrong by signing a new extradition treaty with the US so that terrorist Ahlam Tamimi can be brought to justice.