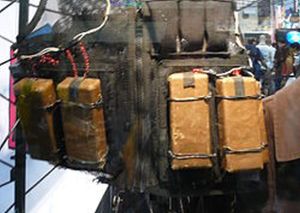 Jerusalem, May 24 – The Joint List alliance of mostly-Arab parties in the Knesset issued its condemnation of Monday night’s bombing outside a concert in Manchester, England, after ascertaining that the terrorist attack everyone was discussing was not aimed at Jews or Israel.
List chairman Ayman Odeh contact the British ambassador in Israel Tuesday morning to convey his condolences to the people of Britain, following extensive consultations with fact-checkers and communications personnel to determine that it was acceptable to issue such condolences, and that he would not, heaven forbid, thereby imply that it was a bad thing when Israelis are targeted for terrorism.
“In a conversation with David Quarrey, the Ambassador of Britain, I expressed my sincere condolences to the families of Manchester; Daesh are the enemies of all humanity,” Odeh tweeted, noting to his staff that the conversation and tweet took place so many hours after the attack because it would not do to express such condolences to Jewish Israelis facing Palestinian terrorism.
“When a Palestinian resistance fighter sneaks into a Jewish teenager’s room and slits her throat as she sleeps, we cannot be seen as condemning that without qualification, or even expressing condolences, let alone ‘sincere’ condolences,” he explained. “It’s a totally different situation from a Salafi jihadi strapping a bomb packed with nails to himself and detonating it outside an Arianna Grande concert where lots of kids were in attendance. That of course must not be confused with a heroic Palestinian resistance fighter doing the same thing at a cafe or night club full of Israelis, including children. So I had to make very sure the terrorist attack everyone was talking about in fact took place not in Israel, and not against Jews or Israelis, but Britain. That verification took some time, which is why it was only this morning that I was able to talk to the ambassador to offer unqualified sympathy.”
Still, Odeh’s message to Britain did not satisfy some members of his political alliance. “I saw no mention of Palestinian suffering under occupation,” observed MK Haneen Zoabi. “Does our chairman wish to imply that there is a context in which bringing that up is out of place? I hope not. He must realize that the project of liberating the oppressed Palestinian people involves leveraging every single interaction to maintain awareness and centrality of the Palestinian cause, ad nauseam. We cannot do that if the world is distracted even for a few moments by such trivialities as the suffering of non-Palestinians.”