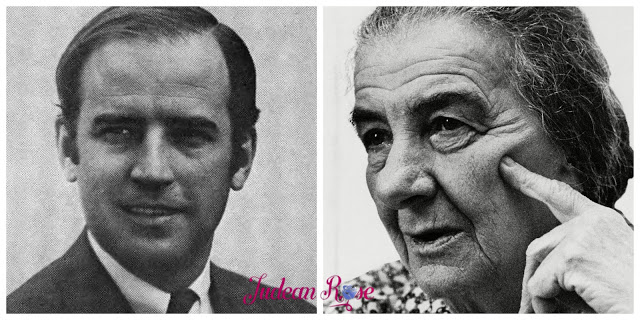 Joe Biden had his first meeting with an Israeli leader, Golda Meir, on the eve of the Yom Kippur war, right after meeting with officials in Cairo. During the then junior senator’s meeting with Meir, Biden suggested that Israel make a unilateral withdrawal from settlements for peace, criticizing the settlement policies of the Labor Party, and suggesting they represent a form of “creeping annexation.” Though Biden assured Meir that Egyptian officials were convinced of Israel’s military superiority, 40 days later, Sadat initiated a surprise attack against Israel.

This is the gist of a bombshell tweet from Israel’s Channel 13 reporter Nadav Eyal containing excerpts from a classified memo from an Israeli official who attended that fateful meeting. While it may have been the first meeting between Biden and an Israeli prime minister, it was certainly not the last. In subsequent meetings with Israeli prime ministers, Biden threatened Menachem Begin with withholding U.S. aid, and publicly upbraided Benyamin Netanyahu because it had been announced in a town council meeting that 1600 homes were to be built in future in the Jewish Jerusalem neighborhood of Ramat Shlomo (more about this here).

1/Golda Meir and Joe Biden, the Israeli memo.
By far, the story Biden most frequently tells about his relationship with Israel leadership is his first meeting with Golda as a young senator. Here’s Biden describing the encounter and Golda’s punch linehttps://t.co/UsroQHRwog

By far, the story Biden most frequently tells about his relationship with Israel leadership is his first meeting with Golda as a young senator. Here’s Biden describing the encounter and Golda’s punch line:

I’ve published this evening a classified memo documenting the meeting, made by a senior Israeli official present in the room. A fascinating meeting.

Biden comes from Egypt, some 40 days before Sadat ordered a surprise attack which will become the Yom Kippur war. He tells the Israeli PM that all the officials he met in Cairo assured him that they accept “Israel’s military superiority.” Of course, they lied (not [Biden’s] fault, of course. Israel was misled by its own intelligence community).

Biden criticizes the Nixon administration for being “dragged by Israel” [into supporting Israeli policies]. He says, according to this government memo, that there is no debate in the Senate about the Middle East because the Senators are “afraid” to say things that Jewish voters will dislike. (He SAYS THAT TO GOLDA)

He criticizes the Israeli labor platform arguing that it’s leading to a creeping annexation of the occupied territories. Considering Israel’s military dominance, Biden suggests it will initiate a first step for peace by unilateral withdrawals. This will be done from areas with no strategic importance—not the Golan.

Golda responds with a long speech about the history of the Zionist movement from its very establishment. The instability of Arab regimes, the unfairness of Supreme Court decisions.

Golda rejects Biden comments on the Labor platform, rejects his offers of unilateral withdrawal and continues to argue that Israel can make no major mistakes considering the situation of the Jewish people after the Holocaust. The official making the notes remarked that Biden was full of respect to the PM yet his “enthusiasm as he spoke” signaled his lack of experience in the diplomatic field.

REMARKS: Biden warning to the PM on the eve of the war that Israel must make some concessions is   prophetic. Some historians argue that Golda’s refusal to consider Egyptian diplomatic initiatives led to war. Biden’s suggestion that Israel make unilateral concessions is interesting. The only time Israel opted for such a move is in 2005 when Ariel Sharon as PM initiated Israel’s withdrawal from the Gaza strip. Much more to say.

Part of the original Hebrew document from the unnamed Israeli official: 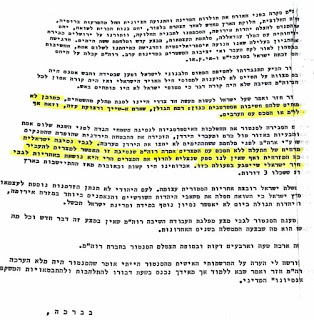 It is important to note that it was the Labor Party that initiated the policy of settling all parts of Jewish indigenous territory, including Judea and Samaria. From the Jewish Virtual Library:

In the past, Labor was more hawkish on security and defense issues than it is today. During its years in office, Israel fought the 1956 Sinai War, the Six-Day War and the Yom Kippur War. Labor agreed to UN Resolution 242 and the notion of trading land for peace. Nevertheless, successive Labor governments established settlements in the disputed territories and refrained from dismantling illegal settlements, such as those established in 1968 at Qiryat Arba in Hebron by Rabbi Moshe Levinger, and others set up by Gush Emunim. By 1976, more than thirty settlements had been established on the West Bank; however, their population was fewer than 10,000.

Joe Biden paints that early meeting with Golda as something precious that cemented in his mind how important Israel is to the Jewish people. It is clear, however, that Joe Biden has always been against the Jewish people settling their indigenous territory. The very thought of Jews planning to build homes in Jerusalem makes him furious. Therefore, contrary to the love fest with Golda he has often described, Biden used the first chance he had to meet with an Israeli prime minister to broach the subject of unilateral concessions.

One wonders how much clout the young senator wielded at that time. Not to mention the timing of subsequent events, with the surprise attack on Israel by Egypt occurring just 40 days after Biden’s meeting with Meir. Is it possible that Golda Meir incurred wider U.S. displeasure by refusing to entertain Biden’s suggestion of unilateral concessions? Was Egypt perhaps emboldened by this state of affairs to attack Israel without fear of American intervention?