Mondoweiss notes a book that came out last year by Jimmy Carter adviser Stuart Eizenstat. If his description of the book is accurate, then we have even more evidence that Carter is an antisemite.

What I did not know till I read the new book, “Jimmy Carter, The White House Years,” by his former top domestic policy adviser Stuart Eizenstat, is that Israeli settlements also bedeviled the Carter administration. From the beginning of his presidency in 1977, Jimmy Carter determined that the settlements were an obstacle to peace because they stood in the way of a Palestinian homeland, which he wished to help establish in the West Bank and East Jerusalem. Carter and his secretary of state Cyrus Vance and national security adviser Zbigniew Brzezinski repeatedly hammered the Israeli government to end Jewish colonization or at least freeze it.

Carter failed miserably in this aim, overwhelmed by a new force he had not accurately reckoned: American Jewish organizations. “I will commit suicide before I abandon Israel,” Carter promised Jewish congressmen when they met with him to express concern about his policy. But Carter could not abandon a parallel commitment to Palestine; and Eizenstat says that Carter believes that taking on Israel and its American lobby cost him his job.

“From the New York primary [in March 1980] onward, I believe Carter was left with the view that New York Jews had not only defeated him in the primary but were also a factor in his loss in November,” Eizenstat writes.

That is, to put it bluntly, ridiculous.

First of all, Weiss is (as can be expected) not telling the whole story. One major reason New York Jews voted by a 4-1 margin for Ted Kennedy over Carter in the primary was because the US (mistakenly, according to this article) voted against Israel in a major UN Security Council vote a week before – a resolution demanding not only that Israel stop settlement activity but that Israel dismantle all existing settlements, including in Jerusalem. It was a farce of a resolution, completely one sided and given Carter’s antipathy towards Israel, it seemed to the Jewish community that Carter was certainly capable of pushing such a resolution.

But in the end, Carter won the nomination.

In November, Carter did lose New York, and practically every other state as well. 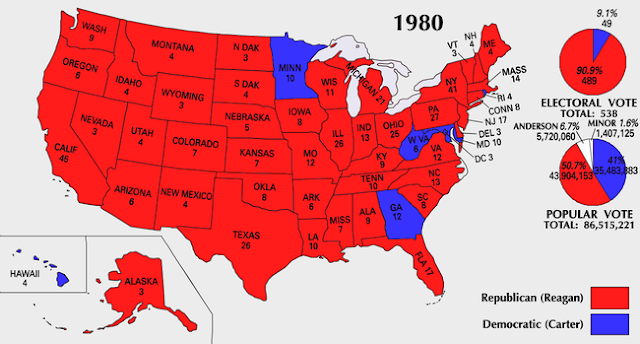 If 20% of New York State voters were Jews (a generous estimate), then even if Carter would have received 85% of the Jewish vote, he still would have lost. And even if he had carried New York, he would have lost the election in a landslide anyway, 399-90 electoral votes.

If Carter really does blame Jews for losing the election, then how can he be considered anything but an antisemite?