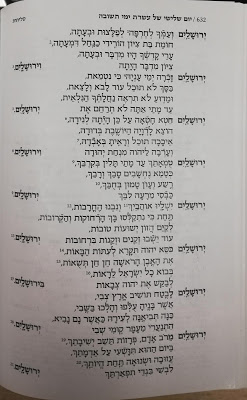 During the days running up to Rosh Hashanah and Yom Kippur, practicing Jews say selichot, a selection of poems (piyyutim) and prayers, composed over the centuries, that are different every day.

One of the many poems said today was about Jerusalem. 25 verses, each that begin and end with the word “Yerushalayim,” that discuss both the pain of losing the city to the Romans 2000 years ago and the hope that it will be rebuilt to its former glory.

Many stanzas extol the beauty and holiness of the city.

Other parts of selichot, repeated every day and many times on Yom Kippur, also implore God to remember Jerusalem.

As I took this photo of the piyyut, I realized that my talit bag it was on says “Yerushalayim” and includes a stylized picture of the holy city.

There are no historic liturgical poems about Jerusalem in Islamic history. The Islamic pretense of loving Jerusalem is literally less than  a century old, started by the viciously antisemitic Mufti of Jerusalem. Before that it was ignored by the Muslim world.

Jerusalem is part of the Jewish DNA. For purportedly Jewish organizations like J-Street to argue that the holy city should not be a part of the Jewish state, and moreover that it should be shared with people who want to destroy the Jewish presence in the Middle East, is a slap in the face of Judaism.

Jews advocating Palestinian Arab rule over the holy parts of Jerusalem are spitting in the face of their own grandparents and great-grandparents who grew up with the love of Jerusalem, a love and a longing that is simply part and parcel of Judaism itself.

Don’t say “As a Jew, I believe Jerusalem must be shared.” The second half of that sentence negates the first half. If you believe that Israel should give up Jerusalem, your claim to be Jewish is based on nothing more than a hereditary accident, and you have no claim whatsoever to speak for Jews.