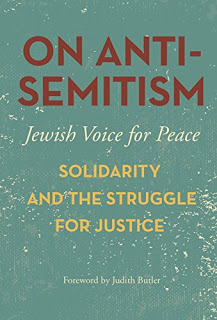 The virulently anti-Israel “Jewish Voice for Peace” has released a book that is ostensibly about antisemitism. But it doesn’ ttake much to realize that the book is really about justifying the merciless criticism of the Jewish state, and only Israel, beyond any context and beyond criticism of any other country, as legitimate.

The foreword is by Judith Butler, the fundamentally dishonest academic who twists Judaism itself to find a philosophical framework for her hatred of Israel. She is also the person who absurdly called Hamas and Hezbollah “progressive.”

Given the contemporary framework in which the matter of antisemitism is discussed, the conflict about how to identify its forms (given that some forms are fugitive) is clearly heightened. The claim that criticisms of the State of Israel are antisemitic is the most highly contested of contemporary views. It is complex and dubious for many reasons. First: what is meant by it? Is it that the person who utters criticisms of Israel nurses antisemitic feelings and, if Jewish, then self-hating ones? That interpretation depends on a psychological insight into the inner workings of the person who expresses such criticisms.But who has access to that psychological interiority? It is an attributed motive, but there is no way to demonstrate whether that speculation is a grounded one. If the antisemitism is understood to be a consequence of the expressed criticism of the State of Israel, then we would have to be able to show in
concrete terms that the criticism of the State of Israel results in discrimination against Jews.

Already Butler is purposefully distancing herself from any definition of antisemitism that includes being against Israel. And one part of that definition is quite easy: opposition to the Jewish people’s right to self determination. The more expansive definition is Natan Sharansky’s 3D test: if the criticism is based on demonization, delegitimization and double standards it is antisemitic.

Naturally, Butler wants to obfuscate the issue rather than deal with it, because, well, she agrees with all three and she doesn’t want to be called an antisemite.

Instead, she floats the straw man that some nefarious people are claiming that any criticism of Israel is antisemitism.


If modern democratic states have to bear criticism, even criticisms about the process by which a state gained legitimation, then it would be odd to claim that those who exercise those democratic rights of critical expression are governed only or predominantly by hatred and prejudice. We could just as easily imagine that someone who criticizes the Israeli state, even the conditions of its founding-coincident with the Nakba, the expulsion of 800,000 Palestinians
from their homes-has a passion for justice or wishes to see a polity that embraces equality and freedom for all the people living there. In the case of Jewish Voice for Peace, Jews and their allies come together to demonstrate that Jews must reclaim a politics of social justice, a tradition that is considered to be imperiled by the Israeli state.

Here she uses the myth, and then she actually promulgates another myth. 800,000 Arabs were not expelled from their homes in 1948. Not even close. But Butler isn’t interested in facts; she is interested in using big words to pretend that she is not avoiding the real issue of left-wing antisemitism such as is practiced by JVP.

Her zeal to divide antisemitism from anti-Zionism would be comical if only she was being honest. She admits that saying that Jews control the media and the banks is antisemitic; what about those who claim the “Zionists” do the same thing?  What about those who claim the Zionists control the US and other governments? I bet most of the authors in this collection believe that fervently.

Finally Butler gets to the crux of her misdirection:

When the charge of antisemitism is used to censor or quell open debate and the public exchange of critical views on the State of Israel, then it is not exactly communicating a truth, but seeking to rule out certain perspectives from being heard.

Butler’s straw man is complete. No one is saying that all criticism of Israel is antisemitic, but her thesis that this is what is happening allows her to create an entirely new spurious charge: that critics of Israel are being silenced by false accusations of antisemitism.

Therefore, this preface to this volume supposedly about antisemitism is really showing that the book is about justifying modern antisemitism.

Indeed, the first essay by Antony Lerman starts off with his rejection of any definition of antisemitism that includes demonization, delegitimization and double standards concerning Israel:

For activists battling daily against the abuse of antisemitism to stifle free speech on Israel/Palestine, on university campuses and in Jewish religious and communal bodies of all kinds, it may seem something of a luxury to dwell on the reasons why contemporary understanding of antisemitism has become so politicized, bitterly contested, and controversial.

A look at the authors of essays in the volume show that every one is not just a critic of Israel but they question Israel’s right to exist as a Jewish homeland:

Part I: Histories and Theories of Antisemitism
Antisemitism Redefined: Israel’s Imagined National Narrative of Endless External Threat by Antony Lerman
Palestinian Activism and Christian Antisemitism in the Church  by Walt Davis
Black and Palestinian Lives Matter: Black and Jewish America in the Twenty-First Century by Chanda Prescod-Weinstein
Intersections of Antisemitism, Racism, and Nationalism: A Sephardi/Mizrahi Perspective by  Ilise Benshushan Cohen
On Antisemitism and Its Uses by Shaul Magid
Antisemitism, Palestine, and the Mizrahi Question by Tallie Ben Daniel

Part II: Confronting Antisemitism and Islamophobia
Trump, the Alt-right, Antisemitism, and Zionism  by Arthur Goldwag
“Our Liberation Is Intertwined”: An Interview with Linda Sarsour
Centering Our Work on Challenging Islamophobia by Donna Nevel
Who Am I to Speak? by Aurora Levins Morales
Captured Narratives by Rev. Graylan Hagler
“We’re Here Because You Were There”: Refugee Rights Advocacy and Antisemitism by Rachel Ida Buff
European Antisemitism: Is It “Happening Again”? by Rabbi Brant Rosen

Conclusion
Let the Semites End the World! On Decolonial Resistance, Solidarity, and Pluriversal Struggle by Alexander Abbasi
Building toward the Next World by Rabbi Alissa Wise

Omar Barghouti? Linda Sarsour? Dima Khalidi? These are the experts on antisemitism that contribute to this volume?

As far as I can tell, only one writer here does not support boycotting Israel, and that is Shaul Magid. Everyone else seems to support it, meaning that they are guilty of double standards towards Israel (no one boycotts other countries nowadays.) So the entire book is an apologia on how singling out the Jewish state for punishment for crimes that, at worst, are committed by every other nation in active conflicts is not really antisemitic.