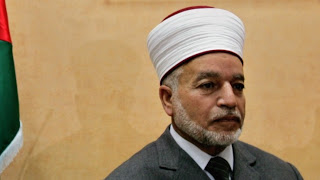 Jerusalem is, as far as I can tell, the only city in history with a “Grand Mufti.”

The current person to hold that political position is Sheikh Muhammad Hussein. He was appointed to that position by Mahmoud Abbas and he often makes statements that go completely against the PA’s official positions presented to the West, like his fatwa that all of Israel should “liberated.”

His incitement continues, as Hussein is now claiming that Israel’s archaeological digs in the vicinity of the Temple Mount are really an attempt to destroy and “Judaize” the Umayyad palaces there.

Yet those Umayyad palaces were discovered by Israeli archaeologists in the 1970s. They have been protected by Israel. The only reason the Mufti even knows those palaces ever existed was because  Israel values all archaeology, including that which preserves Muslim heritage.

I once wrote about other Umayyad structures, barely visited by tourists, which are still preserved by Israel a short distance from the Temple Mount. If Israel wanted to destroy Islamic heritage in Jerusalem it could have covered those structures up and built something on top of it, an area that is prime real estate by any definition.

The Mufti called on the Arab and Islamic world, all its countries and governments and UNESCO for urgent action and immediate pressure on Israel to “stop the implementation of these schemes, which are fueling tension in the region as a whole.”

The Mufti also warned that any damage from an earthquake would be the result of Israeli excavations, setting the stage just in case there is an earthquake. In the past, Palestinian Muslim officials have charged Israel with working to create artificial earthquakes to destroy the Al Aqsa Mosque.

He is the one fueling tension. Israel cares more about Islamic heritage than he does. His only wish is to destroy Israel.