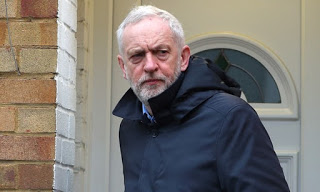 There has been a kerfuffle on social media about UK Labour leader Jeremy Corbyn’s decision to attend a “seder” by the group called Jewdas, which is a radical left organization that claims to have some Jewish identity.


Jeremy Corbyn has been criticised for attending a Passover event with a leftwing Jewish group highly critical of mainstream Jewish communal bodies, and which has described the protests against the Labour leader as “faux outrage greased with hypocrisy and opportunism”.

Corbyn attended a Passover seder, the traditional meal of the Jewish festival, in his Islington constituency that was organised by Jewdas, which last week accused the Jewish Board of Deputies, Jewish Leadership Council and Jewish Labour Movement of “playing a dangerous game with people’s lives”.

The group – which runs alternative Jewish parties, events and a satirical website – said in a statement last week over the Enough Is Enough protests that much of the furore over antisemitism in Labour was “the work of cynical manipulations by people whose express loyalty is to the Conservative party and the right wing of the Labour party”.

A spokesman for Corbyn said he attended the event in a personal capacity and not in his official role as Labour leader, after his attendance was revealed by the Guido Fawkes blog. “He wrote to the Board of Deputies and Jewish Leadership Council last week to ask for an urgent formal meeting to discuss tackling antisemitism in the Labour party and in society,” the spokesman said.

Jewdas, a collective that describes itself as “radical voices for the alternative diaspora”, says its members are “synagogue-going Jews, most with either paid or voluntary positions within our communities”. The group has been highly critical of the Israeli government, but has also published pamphlets for pro-Palestinian demonstrations advising activists how to avoid antisemitism in campaigning.

In a piece for the pro-Labour website Labour List, Charlotte Nicols, one of the attendees of the Jewdas seder, said Corbyn had stayed for four hours and was an active participant in the rituals.

Let’s look at those “rituals” as seen in the Jewdas “Haggadah” from last year. (h/t On The Dark Side)

Most seders involve four cups of wine. Ours involves one quantity of wine and one only: as much as it fucking takes. For our purposes, the FIRST four cups we drink will represent the normal seder shit. The reason it normally involves four is because Judaism is obsessed with fucking four. Four represents “the four seasons of the year”, “the four douchebag ancient empires that fucked with Israel”, and “the four corners of the universe”. But the universe isn’t square. YOU ARE.
Tonight, the four cups are the four types of freedom. Just fucking go with it.

Now that we see how much Jewdas respects Judaism, we can go on:

Usually, left wing seders love talking about how Jews spill some wine in talking about the plagues to say that Egyptian suffering shouldn’t be celebrated. Not this one:

SECOND BUCKET OF WINE
Legend has it that when the Egyptians were being sucked down
into the Red Sea, hallucinogenic angels wanted to chant a cover of
Jeff Buckley’s Hallelujah in victory. This peeved Lorde. Lorde
rebuked: “Fucking angels! How you gonna do me like that? Those
are MY little bastards drowning down there! I know they were doing
bad shit, but fucking show some compassion!”
In a “normal” seder, we’d fill our second bucket of wine only halfway
to show that it’s sad to see any human suffering, even those
asswipes. In this seder, we fill two buckets of wine per person
because…yeah. Fuck those fascists.

Corbyn’s buddies don’t like the Queen either. Or Parliament.

“Prayer against the State of Israel” by Geoffry Cohen

Please God, smash the State of Israel. Smash it in the abundance of your
love. Send forth your light and truth to those who lead. And JUDGE it – on Yom
Kippur try to pay special attention to those who hold elective office. Establish
in them, through some sort of magic God thing, wise counsel, that they might
stop being so fucking racist. We’re sure you’ve been trying but srsly, you need
to give this some more thought.
Strengthen the hands of those who seek to liberate our holy land that isn’t
actually ours at all but everyone’s. Let them inherit salvation and life. And give
peace to the land, and perpetual joy to all its inhabitants. Stop referring to the
“house of Israel”, that’s gone, it’s been hundreds of years, get over it, get a flat.
Plant in our hearts a love of everywhere. Destroy all borders, tear down all
walls, quick, before Banksy comes and draws something on it.
And for all our people everywhere, may God be with them, and may they have
the opportunity to go wherever they want to go, and help them to live in peace
with their neighbours. Cause your spirit’s influence to emanate upon the
dwellers of Stamford Hill and/or Golders Green.

Meaning…Jews. Because mainstream Jews are evil and need to be set right.

The British might tolerate the pure antisemitism and the desire for Israel to be destroyed in this “seder” – but they don’t like when you mess with the Queen.

And Corbyn was an “active participant.”