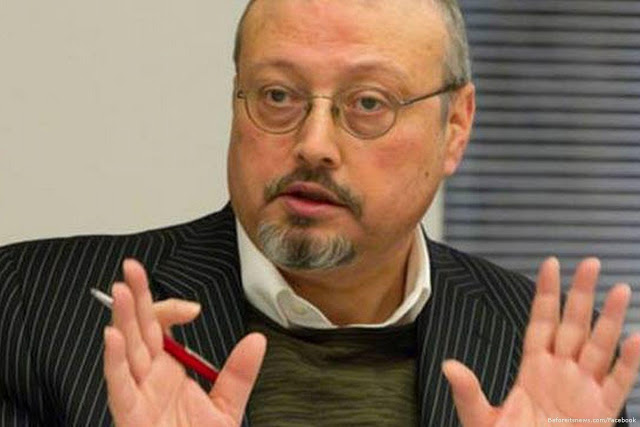 When Washington Post columnist Jamal Khashoggi disappeared in the Saudi consulate in Istanbul at the beginning of this month, the media reacted with understandable outrage to the growingevidencethat he was likely murdered there. Yet even in this situation, there is no justification for presenting Khashoggi as something he clearly was not.
According to his colleagues at the Washington Post, Khashoggi was a “committed, courageous journalist” who wrote “out of a sense of love for his country [Saudi Arabia] and deep faith in human dignity and freedom.”
Much of the media coverage of the case reflects this glowing assessment.
But a Wall Street Journal reporter notedearly on that “Khashoggi was close to several people in the administration of President Erdogan, whom he knew personally and liked,” and apparently, Khashoggi “trusted Turkey even more than the U.S.”
So I started to wonder how a “committed, courageous journalist” with “deep faith in human dignity and freedom” could feel so positive about Turkey’s Islamist regime – after all, Turkey reportedly“has the highest number of journalists in jail worldwide.”
By now it is clear that Khashoggi’s admiration for Erdogan’s Turkey was due to the fact that he himself was an Islamist.
An excellent Spectator piece provides a fascinating reportunder the fitting title “What the media aren’t telling you about Jamal Khashoggi.”
The report argues that Khashoggi’s case has “provoked global outrage … for all the wrong reasons.”
While much of the media now present Khashoggi as “a liberal, Saudi progressive voice fighting for freedom and democracy,” he apparently “never had much time for western-style pluralistic democracy.”
“In the 1970s he joined the Muslim Brotherhood, which exists to rid the Islamic world of western influence. He was a political Islamist until the end, recently praising the Muslim Brotherhood in the Washington Post. He championed the ‘moderate’ Islamist opposition in Syria, whose crimes against humanity are a matter of record. Khashoggi frequently sugarcoated his Islamist beliefs with constant references to freedom and democracy. But he never hid that he was in favour of a Muslim Brotherhood arc throughout the Middle East. His recurring plea to bin Salman in his columns was to embrace not western-style democracy, but the rise of political Islam […] For Khashoggi, secularism was the enemy.”
A year ago, just when Khashoggi started writing for the Washington Post, he reportedlytold Al Jazeera Arabic that “if Saudi Arabia wants to confront Iran, it must re-embrace its proper religious identity as a Wahhabi Islamic revivalist state and build alliances with organisations rooted in political Islam such as the Muslim Brotherhood.”
Is this really a view the Washington Post wanted to amplify when it hired Khashoggi as a regular columnist?
But it’s not only Khashoggi’s Islamist politics that should raise eyebrows about the Washington Post’s decision to provide him a prestigious platform as a columnist.
Khashoggi’s own record of work in the media can also hardly count as a qualification for a columnist in an influential western paper. As noted in the Spectator report, “Before working with a succession of Saudi princes, he edited Saudi newspapers. The exclusive remit a Saudi government–appointed newspaper editor has is to ensure nothing remotely resembling honest journalism makes it into the pages.”
Indeed, Khashoggi was apparently not all that keen on freedom of speech, as illustrated by what he told Al Jazeera last fall:
“Khashoggi, who spoke to Al Jazeera from Washington, DC, expressed hope that Saudi Arabia would go back to assume its leadership of the Arab world and shift its focus to the causes that are very important to the Arabs, mainly to support the Palestinians in their struggle against Israel. He deplored the authorities’ decision to allow some in the Saudi news media to express support for Israel against the Palestinians, while journalists and intellectuals known to support the Palestinian cause were put in jail or felt afraid to speak out.”
Khashoggi also asserted in this interview that it’s “not in the Saudis’ interest to have relations with Israel. Israel will neither fight our battles nor attack Iran or Hezbollah for us.”
According to the Islamist website Middle East Monitor, Khashoggi also recently “called on Muslims to visit Jerusalem,” because Muslims “need to remind the Israelis that Jerusalem is ours.”
*
The Washington Post and many other influential media outlets now try to create pressurein order to force the Trump administration to downgrade relations with Saudi Arabia. In my view, there was plenty of reason for holding Saudi Arabia at arm’s length long before Khashoggi’s disappearance and likely murder – and there was most definitely never a reason to fawnabout Saudi crown prince Mohammed bin Salman like Tom Friedman and other influential commentators and public figures.
But if the media want more distance between the US and the Saudis, the Washington Post might have wasted a golden opportunity when they hired Khashoggi as their very own Islamist columnist, but failed to press him on what he knew about 9/11.
As the Spectator report explains, Khashoggi was seen as a threat by Saudi royals not only because he “emerged as a de facto leader of the Saudi [Muslim Brotherhood] branch,” but also because “Khashoggi had dirt on Saudi links to al Qaeda before the 9/11 attacks. He had befriended Osama bin Laden in the 1980s and 1990s in Afghanistan and Sudan while championing his jihad against the Soviets in dispatches. At that same time, he was employed by the Saudi intelligence services to try to persuade bin Laden to make peace with the Saudi royal family. The result? Khashoggi was the only non-royal Saudi who had the beef on the royals’ intimate dealing with al Qaeda in the lead-up to the 9/11 attacks.”
What a pity that the Washington Post was content to provide Khashoggi a platform to promote his Islamist agenda, but apparently failed to find out what he knew about al Qaeda.