After writing my last post, Not your father’s Middle East, I came across an article in Al-Monitor — For Arab youth, the future is in the Gulf. It makes the same point made by Zvi in the comments to my post, namely that the Arab youth wants change, and sees the UAE as the example to follow in that direction.

Earlier this month, a Dubai public relations company acdaa-bcw, published a survey of Arab youth — here defined as being between the ages 18 to 24, which according to the report number over 200 million people.
According to the survey, it is

In the survey, Afshin Molavi, a Senior Fellow at the Foreign Policy Institute of the Johns Hopkins University, writes that the results of the survey remind him of the fall of the Soviet Union, after which:

the historian John Lukacs famously said, “the isms have all become wasms.” I am reminded of this line as I reflect on the 12th Annual ASDA’A BCW Arab Youth Survey, a remarkable annual barometer of youth sentiments across a vital part of the world. For many young Arabs, it seems, the idea of an ‘-ism’ – an all-encompassing ideology to solve their problems – seems almost as anachronistic as a landline telephone. Pragmatism, not ideological ‘isms’, rules the day among young Arabs, and in an era of pandemic-driven insecurity and political upheaval, this essential fact offers us hope for the region’s future. [p. 28]

Time will tell whether Molavi’s comparison pans out, but the poll results do indicate a potentially dynamic shift in where the Middle East is headed.
And in the survey, the model that the Arab youth point to as the example for a better life and a better future is the United Arab Emirates — for the 9th straight year.
Al-Monitor points to the events that would have formed the experiences of those who took the poll, and what they would have missed:

The oldest of the Arab youth cohort would have been born in 1996. This means they missed the Iranian revolution and the Iran-Iraq war, the Egyptian and Jordanian peace agreements with Israel, the first Palestinian intifada, and the Lebanese and Algerian civil wars, and probably have only the vaguest memories, if any at all, of Saddam Hussein’s tyranny in Iraq and his overthrow in 2003 or the second intifada, to name just a few of the seminal events that shaped the region.

This cohort’s formative memories are instead of the Arab Spring uprisings of 2011, the wars in Syria, Yemen and Libya, the coronavirus pandemic, and governing elites who seem to be doing more than fine themselves and stay in power for really long periods of time, but are unable to provide jobs, pick up the trash or keep the electricity running for the citizens they supposedly serve.

That Arab Spring may have fizzled, but it did have an effect — and young Arabs may be protesting again against the status quo:

Following the events of the Arab Spring, when young Arabs in many countries took to the streets, calling for reforms and an end to corruption, four nations witnessed a change in government – Egypt, Libya, Tunisia and Yemen. Eight years later, 2019 recorded a similar surge in youth-led protests, especially in Algeria, Iraq, Lebanon and Sudan, once again, leading to changes in leadership.

When asked specifically, to young people in these four nations, 82 per cent of young people in Lebanon, 89 per cent each in Algeria and Iraq, and 88 per cent in Sudan said they supported the anti-government protests.
Young Arabs in Iraq (82 per cent) are most optimistic that the protests will lead to real positive change. [p. 19]

The survey also covers how young Arabs feel about the Palestinian issue:

When asked to rank their priorities, corruption and jobs ranked as more important, while defeating terrorism was equally important. 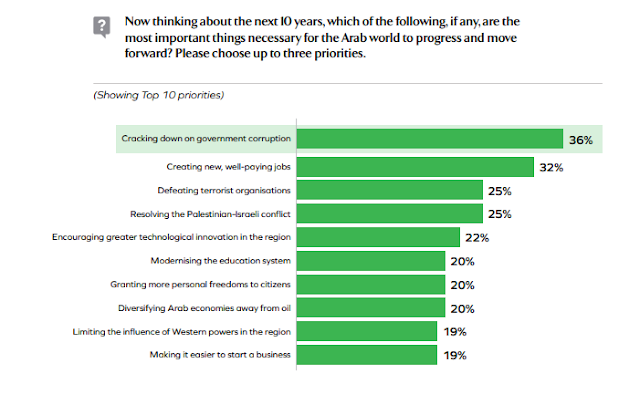 So what about the Abraham Accords?

The survey does not cover reaction to the Abraham Accords. Al-Monitor also points out that

The survey took place before the UAE normalized ties with Israel, but the guess here is that that decision is unlikely to dent the positive perception of the Emirates among youth. The Palestinian issue still holds sway in Egypt, Jordan and Lebanon as a top foreign policy priority, not so in the Gulf, where concerns about Iran dominate, according to polling by David Pollack of the Washington Institute for Near East Policy last year.

That is likely true.
In any case, events seem to be leading in a direction that will bring prosperity — and peace — in the Arab world.
There was a time when we thought of Arab in-fighting as a good thing, as something that kept the Arab world divided and less of a threat against Israel. But real peace in the Arab world, especially the kind that sees Israel as an ally for peace and prosperity — and not just as a military ally against the Iranian threat — could be even better for Israel in the long term.