There are those who claim that supporters of Israel throw around the accusation of “antisemitism” merely as an excuse to deflect criticism of Israel.

At the same time, apparently without being aware of the irony, there are times that criticism of Muslims is deflected by claiming that the critics are, in fact, guilty of Islamophobia — such as when Ilhan Omar responded to Liz Cheney’s criticism of Rashida Tlaib’s comments “we all know you never met a Muslim you didn’t want to vilify!” and accusing her of “deep-seated hate and Islamophobia”

Now we have reached a whole new level, where we see accusations of antisemitism in order to deflect criticism of Bernie Sanders.

At issue are some of the friends and allies that Sanders surrounds himself with: 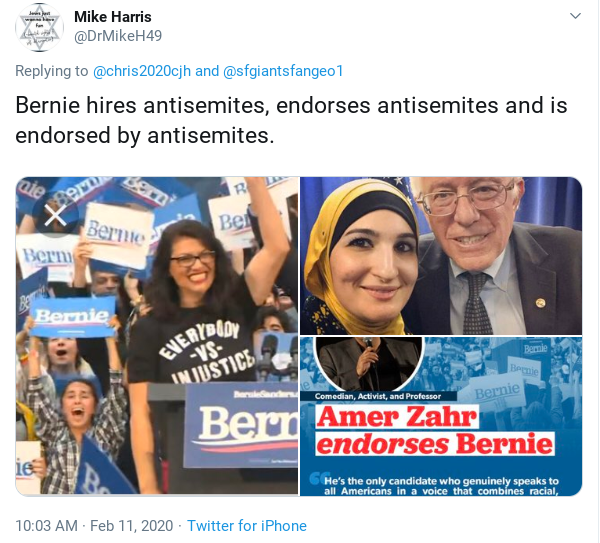 This has led The Washington Examiner to claim Bernie’s campaign has an anti-Semitism problem and has led The Federalist to ask:


Bernie Sanders’ associations paint a pattern of proximity to antisemitism, which raises the question: Is it that he really doesn’t notice, that he’s willing to tolerate it, or that he somehow also supports it?

A typical response to rebut this is to claim that the criticism accusing Sanders of antisemitism is itself antisemitism: 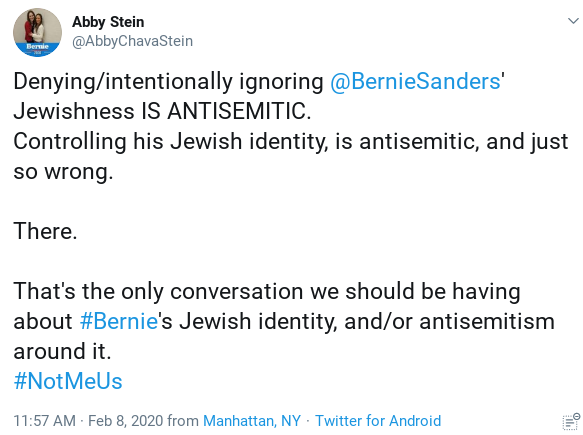 But does Sanders himself even understand what antisemitism is?


“Like other forms of bigotry—racism, sexism, homophobia—antisemitism is used by the right to divide people from one another and prevent us from fighting together for a shared future of equality, peace, prosperity, and environmental justice.

Like the Democrats, when they were called upon to condemn Ilhan Omar’s antisemitic tweets, Sanders also groups antisemitism together with all other forms of bigotry, and sees it as a right-wing phenomenon.

While he claims “I will always call out antisemitism when I see it. My ancestors would expect no less of me,” the fact remains that you have to recognize antisemitism before you can call it out and we have already seen the difficulty Sanders has on that score — what with his defense of Ilhan Omar’s accusation of dual loyalty to Israel, his making Linda Sarsour a surrogate and his alliances with people who regularly attack Israel.

So we are left with the odd situation that Sanders is surrounding himself with divisive people like Sarsour, Omar and Tlaib — yet he claims to be opposed to being divisive

How can someone who identifies as a Jew associate with antisemites?
But maybe the focus of these criticisms of Sanders is actually misplaced.


Nowadays he talks sparingly about his Jewish identity, but when he does he’s quick to mention the Holocaust. Tellingly however, he neglects how he stood silently and ignored the cries of Soviet Jews to live a free life. Whereas he’s willing to let black nationalists rip microphones from him and he openly associates with fraudulent civil rights activist Linda Sarsour, he never misses an opportunity to condemn Jewish nationalism by appearing at a J Street convention.


After his stay on a kibbutz, Bernie the Jew seems to have gone AWOL. Did he stand with Israel in 1967? 1973? In 1975, when the UN labeled Zionism racism? Did his Holocaust-driven pain lead him to active involvement in the movement to free Soviet Jewry?

The fact is, Sanders shies away from publicly identifying with and relating to the Jewish people.

In 1994, Sanders refused to single out Farrakhan official Khalid Muhammad for condemnation for racist remarks, including referring to Jews as “bloodsuckers.”

In 2002, when Congress considered a bill supporting Israel against terrorism, Sanders voted “present”

When Sanders was asked if he viewed himself as a Zionist in an interview in 2015, he was clearly uncomfortable and answered politically, rather than personally:


Ezra Klein: Do you view yourself as a Zionist?
Bernie Sanders: A Zionist? What does that mean? Want to define what the word is? Do I think Israel has the right to exist, yeah, I do. Do I believe that the United States should be playing an even-handed role in terms of its dealings with the Palestinian community in Israel? Absolutely I do.

Similarly, in 2016, at a political event, Sanders again sidestepped an opportunity to address his personal feelings about being Jewish when a man in the audience claimed: “Jews run Wall Street, they run every campaign.”

“I am proud to be Jewish,” [Sanders] declared, to cheers from the audience. But then Sanders did something odd. Rather than using the question as a teaching moment to address and rebuke its anti-Semitic underpinnings, Sanders instead immediately pivoted to his stump speech on the Israeli-Palestinian conflict. “Talking about Zionism and Israel,” he said, “I am a strong defender of Israel, but I also believe that we have got to pay attention to the needs of the Palestinian people.” He never challenged the actual contents of the question, let alone labeled it anti-Semitic. [emphasis added]

Sanders did not see this as an antisemitic attack on the American Jewish community in general — he saw it as an opportunity to fall back into the political safe-space of his stand on Israel and the Middle East.

“As a Jewish candidate he is a unique voice, he’s a person whose personal bio is rooted in ending up on these shores as a result of suffering anti-Semitism abroad. This is the most quintessential Jewish American story if ever there was one, to have him out there for the American Jewish community, which is attacked and under siege. It is so valuable to have a politician and a leader running who gets it in his kishkes.” [emphasis added]

But if so, how do his ‘kishkes’ allow Bernie Sanders to keep teaming up with antisemites?

In 2015, during an interview on NPR, Diane Rehm matter-of-factly asked Sanders about his being a dual citizen of Israel, a claim he quickly rebutted. Yet, here is Sanders teaming up with the people who make the same accusation of Jewish dual loyalty of others. James Kirchick notes the incongruity, and writes:


It also raises the troubling possibility that Sanders is using his own Jewishness to mainstream some of the worst actors in the Democratic Party’s progressive wing–either out of the same naivete that led him to honeymoon in the Soviet Union or a wager that their support is necessary to bring about his desired political “revolution” in America.

But maybe the answer is more basic, and ties in with the Bernie Sanders record, or lack of a record, of standing together with Jews both in the US and around the world.

As Yossi Klein Halevi puts it:


Bernie Sanders is not an enemy of the Jewish people. He simply doesn’t care enough about Jewish concerns to be considered a friend.