The Center for Research on Extremism (C-REX) at the University of Oslo released a fascinating study of antisemitism in Europe over the time period 2005-2015. The Eye on the World blog has a nice summary.

Most of the news is bad. Here is a depressing chart: 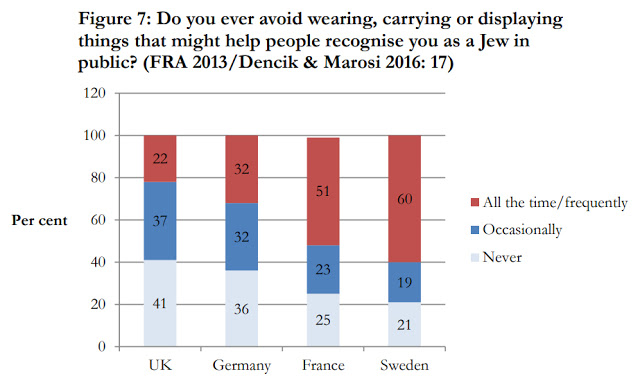 But amid the bad news, you can read this section:

Russia clearly stands out with a very low number of registered incidents of antisemitic violence in proportion to its large Jewish population (approximately 190,000). Only 33 incidents were found for the period 2005–2015. We must assume that a number of incidents have occurred without being reported in the media and thus not registered in the SOVA Center’s database, but according to Aleksandr Verkhovsky, head of the SOVA Center, the level of antisemitism-related violence in Russia is clearly far lower than in Western European countries.26 It is also notable that no reports could be found of Russian Jews feeling forced to conceal their identity in public. On the contrary, being Jewish has evidently become “fashionable” among Moscow youth.

For those of use above a certain age who remember the persecution that Jews suffered in the Soviet Union, this is nothing short of astonishing. Antisemitism is now far worse in Western European countries than it is in Russia, and there is no fear of walking around with a kippah.
In one generation, a nation has nearly purged itself from overt antisemitism, while the “enlightened” liberal states has seen it skyrocket.
A lot (but not all)  of this has to do with Muslim immigration to these nations, of course. But that just pushes off the issue – Muslim antisemitism is tolerated in Western European nations more than other forms of hate are.