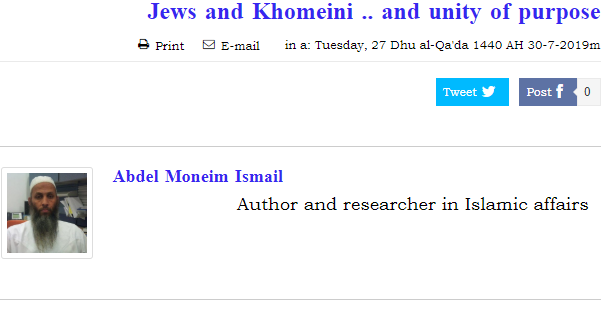 Apparently, the Iranians have been Zionist from the very beginning. The Ayatollah Khomeini initiated a deal to be fully loyal to the “Zionist project.”

The way that Iran’s mullahs fool the world is by saying they won’t fight the Jews until the 13th Imam messianic figure arrives, and since that will never happen, they are allies forever.

We also learn that Jews were the real founders of Shi’a Islam. And that Jews are comparable to Satan and the Crusaders, although neither are as bad as the Shiites.

In this case the Jews are a prop to give the reader an idea of how super bad Shiites are, since every self respecting Sunni is already expected to be virulently antisemitic. The article wouldn’t make sense otherwise.