Issa Amro calls himself the “Palestinian Gandhi” even though he has been arrested for violent crimes.

As a notable Palactivist, Amro never misses an opportunity to take any news story and try to make it about Palestinians. 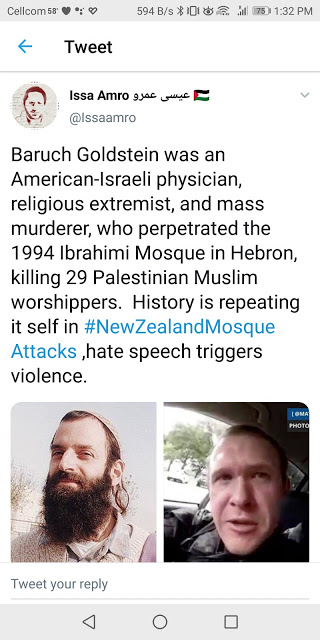 Seriously, this guy is pretending that Boruch Goldstein is the best example of a person killing people in a house of worship.
Of course, there are many examples of Arabs killing Jews in synagogues.
In April 1956, Arab terrorists opened fire on a synagogue full of children and teenagers, in the farming community of Shafrir. Three children and a youth worker were killed on the spot, and five were wounded.
In 2014 was the Har Nof Massacre, where two Arabs killed four worshipers and a Druze man at a synagogue.  This attack mirrors much more closely the coordinated plot in today’s massacre of Muslim worshipers.
There were others in Israel like the Mercaz Harav attack, but Issa’s fellow Palestinians also have targeted synagogues worldwide.

The attack on the Great Synagogue of Rome in 1982 by five Palestinians killed a three year old.

In 1986 two Palestinians mowed down 22 worshipers in an Istanbul synagogue.

There were other attacks on synagogues that killed non Jews, like in Ghriba and another in Istanbul, by Islamists who were incited by Palestinian propaganda.  Also a number of plots to blow up synagogues in the US by Islamists were foiled by the FBI.

If you want an analogy to today’s coordinated massacre, apparently fueled by incitement and hate, there are plenty of better examples than Hebron – incidentally a city whose synagogues were ransacked in 1929 by Amro’s heroes.

Amro’s glee in trying to make the horrific New Zealand massaacres about Palestinians shows that he really diesdoe give a damn about the victims.  They are just pawns in his anti Israel crusade.