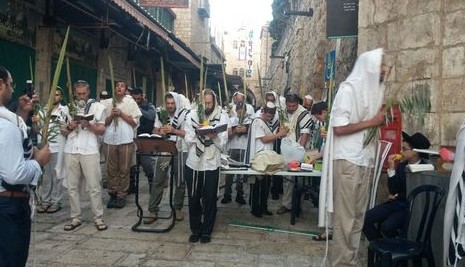 
A ban on Jewish prayer on the Temple Mount has been extended to the Muslim Quarter of the Old City, police officials say, justifying the series of recent arrests of Jews praying outside of entrances to the Temple Mount.

After a number of arrests of Jews praying outside of the gates of the Temple Mount, police justified the arrests during a court hearing on Monday, claiming that the ban on Jewish prayer is not limited to the Temple Mount, but extends to the areas around the entrances to the holy site and even to the Muslim Quarter as a whole.

Police representatives Safi Sarahan and Roei Avrahami explained the ban in court, following questioning by an attorney from the Honenu organization representing several girls arrested for praying in the vicinity of the Temple Mount.

The officers revealed that prayer by Jews anywhere near the Temple Mount or even in the Muslim Quarter was considered “disturbing the peace”, except where coordinated with the police in advance.

“Prayer is permissible anywhere in the Jewish Quarter, but the moment you come without permission and pray in the Muslim Quarter, that causes a public disturbance. Inside the Muslim Quarters and the entrances it is forbidden to pray.”

When pressed by the Honenu attorney to cite the law which prohibited Jewish prayer in the Muslim Quarter, the police represents said the matter was within the discretion of the police, under their general responsibility for “keeping the peace”.

NRG broke the story, and followed up,. Agriculture Minister Uri Ariel said it is a discriminatory policy by the police. “If a Jew prays, it can anger the Muslims, then they will breach the public peace, that makes a riot, they run wild, so Jews are not allowed to pray. Everything is upside down. After all, somewhere in Tel Aviv, if a Muslim wants to pray, he has no problem, he takes the prayer mat in the middle of Tel Aviv, the middle of Safed, the middle of each location in Israel – there is no one to bother him about it. We respected him. Would one of us dare to raise a hand against him?! To mock him ?! No, he is respected.”

Effectively, Muslims are being rewarded for antisemitism and rioting. By the police in the Jewish state. The police are agreeing with the Muslims that prayers are “provocative” and violence in response to those so-called provocations are fine.

Will Jews need special permission to pray at the Kotel HaKatan, or the Ohel Yitzchak synagogue, both of which are in the Muslim quarter?

All Muslims have to do to rid the quarter of Jews is to start riots, and the police will do what the Muslims want accomplished.

Amnesty and HRW have a dilemma. Do they support the Jews who want to exercise their human right of freedom of worship, or do they support the Israeli police? I think that these brave “human rights” workers will stay out of this issue because they can’t support either side.