TOP NEWS
http://elderofziyon.blogspot.com/2020/11/israeli-jews-overwhelmingly-prefer.html
The Israel Democracy Institute issued results of a survey  a day before the US election day, asking whether Republican incumbent Trump or his Democratic challenger Biden is the preferred candidate, “from the standpoint of Israel’s interests.”
The results are a solid proof that liberal Zionist groups, such as J-Street, don’t know what they are talking about.
J-Street likes to represent itself as caring about what is best for Israel – the JCPOA deal with Iran, ripping up Jewish communities in Judea and Samaria, a two state solution. It endorsed Joe Biden in great part because of his policies towards Israel, Palestinians and Iran.
Israelis, by an overwhelming majority, strongly disagree with J-Street as to what is best for Israel.
Israeli Jews say that Trump is the preferred candidate from the perspective of Israel’s interests by a stunning 70%-13% margin.
Not only that, but Israeli Arabs tend to agree, with a plurality (36-31) saying Trump is the preferred candidate. 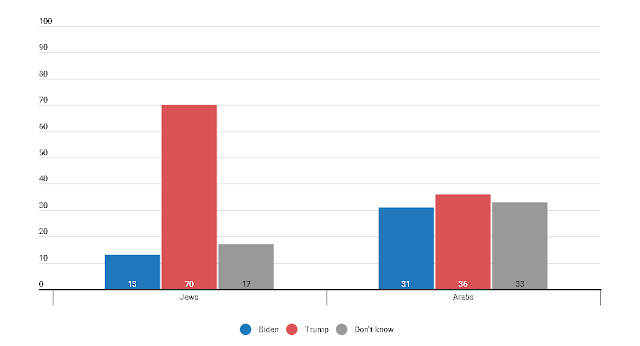 This was reflected by Israeli Jews who are on the political Right and Center. The Israeli Right prefers Trump by a landslide 82-6, and the Center prefers Trump by an enormous 62-16 majority.
But even the vanishingly small number of Israelis who openly identify with the Left were split 50/50 between whether Trump or Biden were better for Israel! 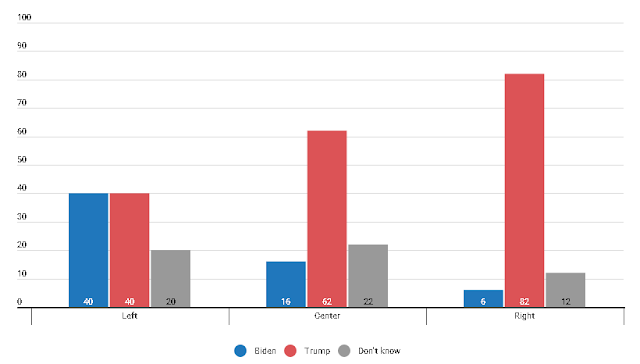 J-Street, which pretends to be in the broad liberal center, is far to the left of the most leftist Israelis, who are as comfortable with Trump as they are with Biden.
Either Israelis know nothing about their own country and they need J-Street to teach them what is best for them, or J-Street is openly lying about wanting what is best for Israel.