Now, I read that there was a conference on “Israeli Cuisine as a Reflection of Israeli Society” in Washington  yesterday – and the same absurd accusations, and more, were made by moronic Israeli leftists who participated.

[A]ppropriation was very much the theme of the next panel, “Israeli-Arab Food Politics.”

“There is a lot of politics behind the food you eat,” said the moderator, Johanna Mendelson Forman, who teaches a course at American called Conflict Cuisine: An Introduction to War and Peace Around the Dinner Table. “The kitchen has become the venue of new foreign policy.”


The three social scientists on the panel — Nir Avieli, Ronald Ranta and Ronit Vered, all Israeli Jews — advanced the theme that there was an original sin to Israeli cuisine: the repression of its origins among Palestinians.

Some of their arguments were salient and recognizable to anyone who has lived in Israel. For instance, there’s the tendency for Israelis to refer to “Arab cuisine” — and not Palestinian — although there are dishes adopted by Israelis that are specifically indigenous to Palestinians, such as maqloubeh, a meat, rice and vegetable concoction. (Solomonov is an adamant exception and refers to an indigenous Palestinian cuisine that he has incorporated into his repertoire.) 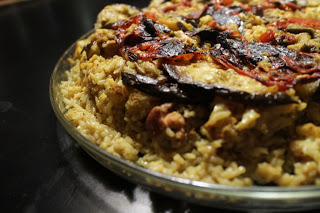 It is hard to research the origins of certain foods. Maqloubeh is generally regarded nowadays as “Palestinian” but not universally – some people say it is Iraqi. Some say it is Jordanian.  A version of the dish (same name which means “upside-down,” , different recipe) was in a 13th century Baghdad cookbook. Is it such a crime to refer to dishes like these as “Arab?” It seems far more accurate, not an attempt to “erase” a culture.

On the contrary, the impression I get is that giving the “Palestinian” label to foods nowadays is far more of a political statement than Israelis referring to them as “Arab.”

Other arguments from the academics, however, seemed a tad overeager to make a point about Israel and colonialism. Ranta, a lecturer on international relations at Kingston University in London, decried the “denial of an Arab Palestinian contribution” among Israelis to their cuisine, saying that the argument that many Jews of Middle East origin were likely to already be acquainted with the dishes was a “glaring example” of this denial.

Um….half of Israelis come from Sephardic parents.  Going back to maqloubeh – they certainly ate it before Israeli chefs incorporated it in their menus.

These guys are nuts.

But the self-hating Israelis reach the height of absurdity here:

Avieli, the president of the Israeli Anthropological Association, said that pizza was the most popular food in Israel, suggesting it was because Israelis despise their neighbors and long to be European.
“They are in the Middle East, what can you do? Where they would like to be is southern Italy,” he said.

Yes, the president of the Israeli Anthropological Association claims that Israelis liking pizza means they long to be in Italy and despise where they live.

It takes an academic to say something so breathtakingly stupid.

The only hate that is evident at conferences like this is the hate against Israeli Jews.

The idea that people eat foods because they taste good is apparently way too difficult to digest for self-hating Israeli “scholars.”

How these halfwits manage to draw salaries for their scholarship is truly a mystery.