There are petitions with 15,000 signatures to free Mays Abu Ghosh from prison: 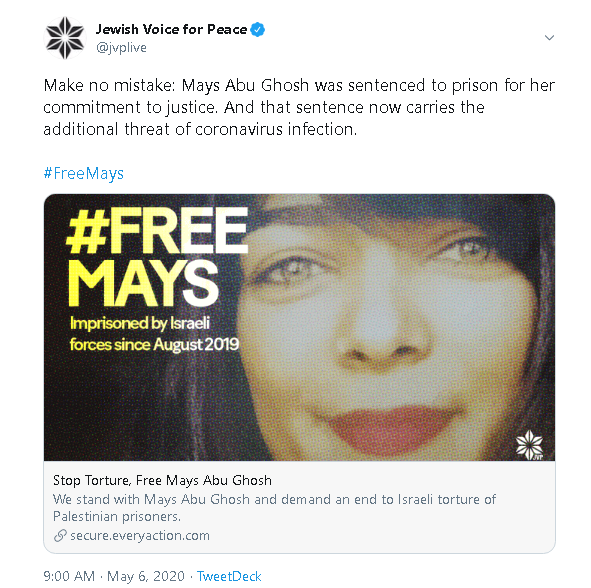 She was sentenced to 16 months in prison this week.

What were the charges against her? Haaretz’ Gideon Levy co-wrote (with Alex Levac) a sarcastic article making fun of the idea that she is anything but an innocent lamb, so let’s see if we can translate his spin into truth:

Mohammed Abu Ghosh says that his daughter’s arrest has been even more difficult for him than his son’s death. He casts a wistful glance at a huge photo of Mays’ pretty face and falls silent. A pendant in the shape of Palestine is hanging around her neck. Mays, his eldest, has been in Israeli custody for five months.

Mohammed has known his share of suffering: His son Hussein was killed at the age of 17 after perpetrating a stabbing attack in the settlement of Beit Horon in which Shlomit Krigman was killed in 2016. Mohammed’s nephew, also named Hussein, was killed at the age of 19 on the first anniversary of his son’s death, in a car-ramming attack in the settlement of Ma’aleh Mikhmash. And Mohammed’s son Suleiman, now 17, was twice arrested last year and held in administrative detention – incarceration without trial – for four months each time.

Translation: Mays comes from a family of terrorists.

Now Mays is in prison and, according to her lawyers and other sources, she has been tortured during her interrogations. The five counts of the indictment against her sound serious and terrifying, but are for the most part revealed as ridiculous when the details are known.

The “unlawful association” that Mays, a fourth-year student in the media department at Bir Zeit University, is accused of belonging to is the left-wing students’ organization, Qutub. Israeli authorities claim that Qutub is affiliated with the outlawed Popular Front for the Liberation of Palestine, but the student group denies any such connection.

Apparently Levy was convinced by that denial without doing any checking. Because the Facebook page of Qutub says that it is indeed associated with the PFLP as well as the DFLP. 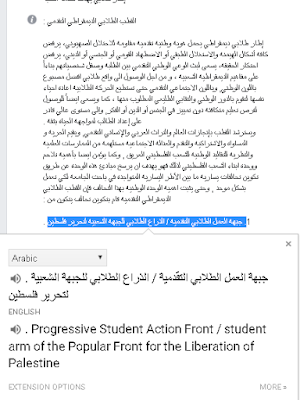 And its activities are featured on the PFLP website.

And the Facebook page of Qutub also explicitly supports violence. 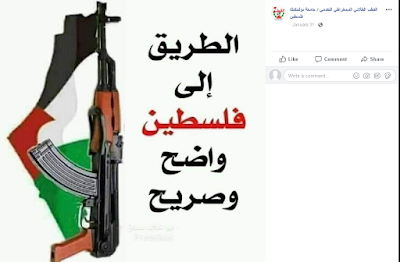 “The only road to Palestine” (is through violence.)

So, yeah, Mays is associated with a terror group.


“Bearing, possessing and manufacturing weapons” boils down to filling two bottles with sand at a gas station and inserting pieces of cloth into them, which to her interrogators indicated that she might have been making a Molotov cocktail.

Hold on. She inserted sand and some cloth into a glass bottle outside a gas station.

The only ingredients in a Molotov cocktail are a bottle, gasoline and a cloth as a wick. But guess what? Sand is also used in Molotov cocktails to give it some weight and it helps the glass break easier.

Of course she was putting together a Molotov cocktail. What else could she have been doing – an art project outside a gas station? Perhaps someone should ask Gideon Levy.

So, yeah, Mays was caught manufacturing a firebomb.


“Contact with an enemy” apparently involved participating in a conference about the Palestinian return in Lebanon, speaking on a radio program about her dead brother and intending to prepare a report on Hadeel al-Hashlamoun.

About that conference in Lebanon: Mays met with Hezbollah while there. In fact, she was offered a job as a reporter for Al-Nour TV while there, which is a Hezbollah station.


Paragraph 2.4 of Mays’ charge sheet is particularly serious: “In August 2019, or a proximate date, the accused spoke with Kutzi Masalmeh, Lian Elkaid and Samah Gradath about holding a summer camp for the organization [Qutub], and wondered how to go about it in the light of the detention of a number of people.”

Fortunately for Israel, the malicious and perilous plan to organize a summer camp was thwarted in time, thanks to the Shin Bet security service.

What do you think would be taught at a summer camp run by a group linked to terror? It isn’t a summer camp, it is an indoctrination center for children to join the PFLP.

Just based on a biased Haaretz report and some basic searches, we can see that Mays Abu Ghosh grew up with terrorists, joined a student group linked to terrorists and that glorifies terrorists, met with terrorists herself, and was caught making two firebombs.

And these are just the charges and details we know about.