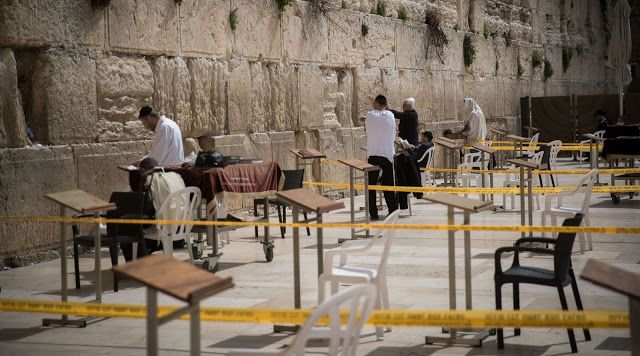 The Western Wall Plaza reopened to worshippers on Tuesday morning.

The reopening comes after the Israeli government relaxed some of its coronavirus restrictions, including canceling the restriction on joining outdoor prayer services only within 500 meters from a person’s home.

The plaza in front of the Western Wall will be divided into as many prayer areas as possible in accordance with government social distancing regulations, The Western Wall Heritage Foundation, which operates the holy site, said in a statement.

For the next few days, up to 300 worshippers will be allowed to be in the Western Wall plaza at one time, contingent on them wearing masks.

The committee that supervises the Jewish settlers’ incursions into the Islamic Al-Buraq Square, west of the blessed Al-Aqsa Mosque, announced today, Tuesday, the resumption of these incursions in the place starting today.

This is just a reminder that for all the assertions that Muslims are tolerant towards Jews, there is a significant percentage that wouldn’t even allow Jews to worship at the Western Wall if they were in charge. In fact, there is not a single Jewish holy place that Muslims do not also claim as their own, so they would – if they were in a position of power – ban all Jews from all holy places.

The people who say they want peace don’t like to admit that fact, or they pretend that a Muslim state would act differently today.