TOP NEWS
http://elderofziyon.blogspot.com/2017/06/islamist-terror-attacks-just-another.html
By Petra Marquardt-Bigman
When a suicide bomber blew himself up among the crowd leaving a concert by teen idol Ariana Grande in Manchester on May 22, most Israelis were immediately reminded of the very similar Hamas attack targeting Israeli teens at a popular Tel Aviv discotheque almost exactly 16 years earlier. A Legal Insurrection post on the 15 year anniversary of the Dolphinarium bombing has some interesting quotes from the media coverage at the time. According to The Guardian, the father of the suicide bomber described his son as “an observant Muslim who moved [from Jordan] to the West Bank two years ago in search for a better job.” The father added: “I am very happy and proud of what my son did and I hope all the men of Palestine and Jordan would do the same.” An ABC report quotes a similar statement from the father and describes how the terrorist was celebrated and idolized in his town. A nine year old boy told the reporter: “When I grow up, I want to be just like him.” The late Palestinian psychiatrist Eyad Sarraj confirmed that by perpetrating a murderous attack, a terrorist “gives his family the highest status ever. His name becomes immortal.” Sarraj also explained: “The teaching of Islam tells you if you die for God, you don’t actually die […] In fact, you find in the last seconds of people acting this act, they smile.”
Sixteen years later, the popular Irish television comedy writer Graham Linehan takes offense when Israel’s prime minister declares after the attack in Manchester: “Terror is terror is terror. We must all unite to defeat it […] We will defeat them.” In response, Linehan sneered: “Bibi bombed children playing football on a beach. What’s this ‘we’ business?” Linehan’s tweet garnered some 2350 “Likes” and was re–tweeted by 1853 people (at the time of this writing); among those who re-tweeted it were Linda Sarsour and Ali Abunimah. Abunimah also re-tweeted an antisemitic parody account of Netanyahu – but then, he has of course long been a dedicated purveyor of updated versions of the medieval blood libel. 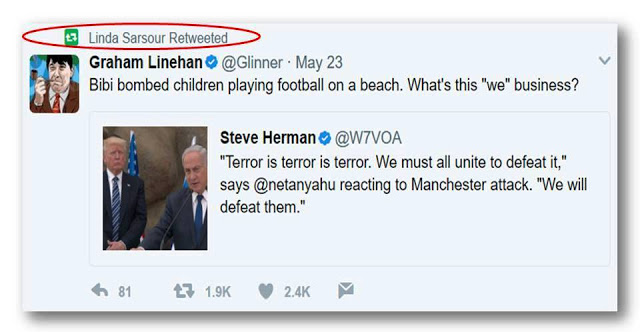 When you check out the responses to Linehan’s accusation, you will see that one Twitter user challenged him: “Motive for intentionally killing kids on a beach ? Good PR. ? I really don’t think so. Use your brain.” But apparently, Linehan’s brain is such that he responded: “? No idea what point you’re trying to make here but if it’s a genuine question then–to spread terror. It was terrorism.” 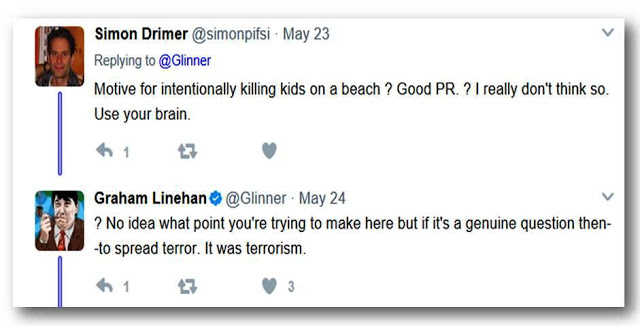 So according to Linehan, Israel – or at least its prime minister – is just as much a terrorist child killer as the suicide bomber who caused carnage in Manchester.
Almost exactly two years ago, Linehan also tweeted about the incident he referred to in his recent tweet. Unsurprisingly, he was incensed that the New York Times reported about the findings of Israel’s investigation into the strike that targeted a compound used by Hamas, but resulted in the killing of four boys playing nearby on a beach in Gaza. Linehan made clear that he preferred the version of Mondoweiss – which, for good reason, has been described as a “hate site” that traffics in antisemitism and caters to people who think one Jewish state is one too many. 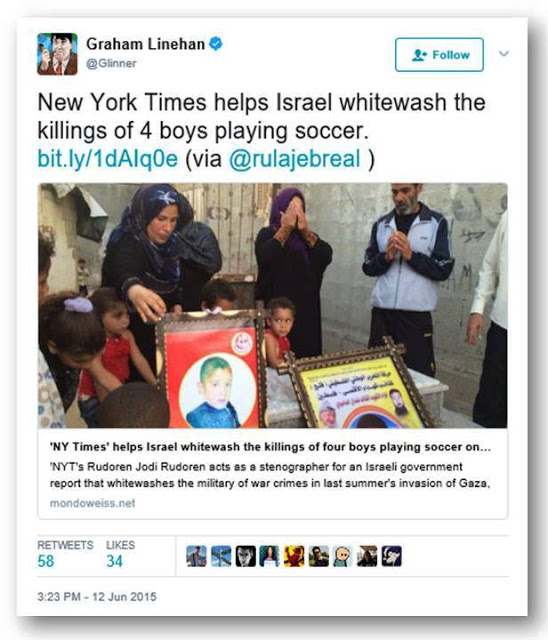 A Hamas mouthpiece like the Middle East Monitor will also be considered by Lineham as a reliable news source, and occasionally, he will turn to the award-winning antisemite Max Blumenthal to confirm his views about the world’s only Jewish state.
Needless to say, Lineham has long been upset about “the tactical, disingenuous use of the anti-Semitic smear against anyone who criticises Israel;” he has long realized that “charging Israel’s critics with ‘anti-Semitism’” is just a pathetic effort to “effectively silence them.” And he has such pearls of wisdom to share: “’Peculiar how Israel is always violently attacked but it’s only the ‘attackers’ who die.’” Pity, isn’t it – if only more Israelis died… 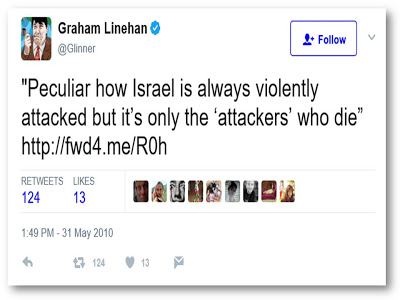 And another insight that his followers appreciated: “Want to be called a Nazi? Criticise Israel and wait two days. Works that way for me, at least.” 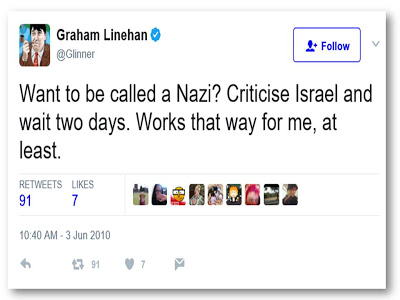 Well, it’s so funny, isn’t it – but as a matter of fact, today’s Nazis fully share Linehan’s concerns about “the tactical, disingenuous use of the anti-Semitic smear against anyone who criticises Israel.” Indeed, Linehan could just go to David Duke’s website and search for “anti-Semitism” and get plenty of results that reflect his views on the matter. They even created such a funny little image to go with some of the relevant posts!!! 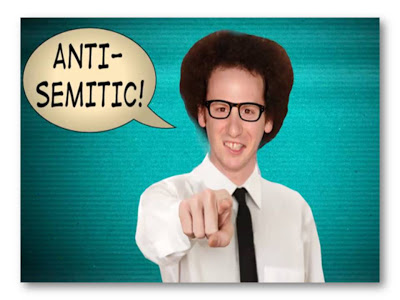 Linehan could also check out Stormfront, where he could find gems like “The Truth is anti-Semitic”… And needless to say, David Duke (who is of course a favorite on Stormfront) is as furious as Linehan when it comes to Israel’s murderous rampage in Gaza, and it just so happens that he also thinks Israel is terrorist…
Of course, we can’t know if Linehan would consider Duke and his Stormfront friends as Nazis, and we can only wonder how he feels that, when it comes to Israel, he seems to have quite a bit in common with them.