Ken Roth of Human Rights Watch has, for the first time, indirectly addressed a tweet of mine.

I pointed out that he wrote about how important it is for refugees to be able to be resettled in third countries, and I noted that he never demanded that from Palestinians who remain stateless in Arab countries be given citizenship, and HRW has only insisted on “return.” 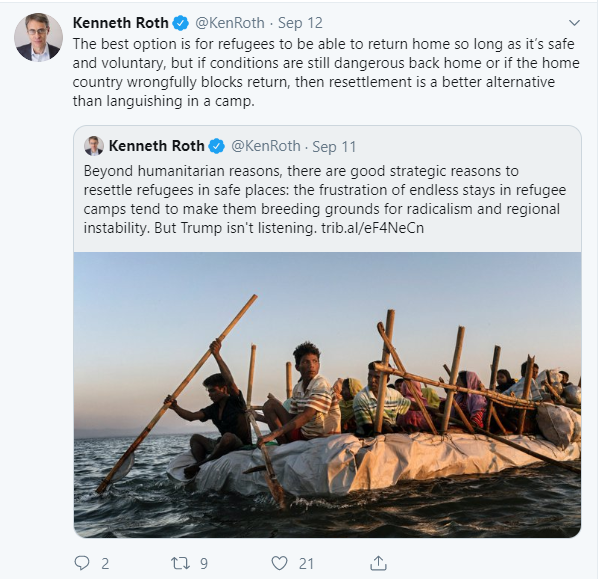 He is saying here that Israel is “wrongfully block[ing] return.”

Is Israel wrong to have its own immigration law? Must it conform with Roth’s idea of international law?

HRW (as well as Amnesty) pretend that descendants of Palestinian refugees be eligible for “return” based on a tortured reading of the Nottebohm case before the International Court of Justice. Nottebohm, written in 1955, is explicit in saying that for a person to be considered a citizen of a country he must have well-established connections to the state – not the land, but the state. Somehow HRW uses this as proof of the right of return for UNRWA “refugees” to still have ties to a state of Palestine that never existed, and therefore they can “return” to be citizens of Israel.

The irony is that HRW and Amnesty completely ignore what Nottebohm says about nationality that destroys their argument:“international law leaves it to each State to lay down the rules governing the grant of its own nationality. “