Omar Shakir of Human Rights Watch tweeted about a new study of attacks on health care in different countries in 2018, and he highlights a statistic to make it sound like Israel is far worse than other countries: 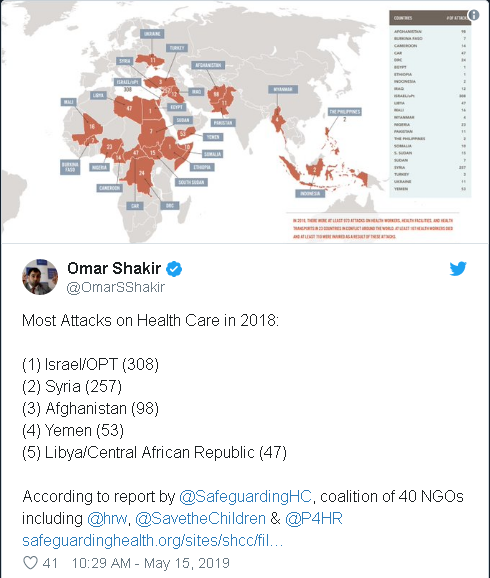 This is so misleading as to qualify to being a lie.

The report uses open sources, meaning that it can only report on attacks that it sees news or NGO reports about. Anomalies about the Israel/Palestinian territories incidents compared to the rest of the world are apparent but how many reporters will dig into them?

Most of the injuries to health care workers in the territories are from tear gas. Tear gas is not even mentioned for any of the other countries in the report. The reason is obvious – tear gas is a non lethal weapon when used properly, and Israel employs non-lethal methods when it can. Syrian or Yemeni attackers deliberately use lethal methods.

Again digging into the report, even the 40 NGOs that authored it admit that their statistics – so prominently displayed in full page charts – are woefully inaccurate.

The report dataset suffers from the typical limitations of datasets that are largely built from open sources, including reporting and selection bias. First, the available information is likely to be underreported. Selection bias in open source means that not all events are reported and that events in more remote areas or those affecting less well-connected population groups are less likely to be reported.

…In countries and territories with good internet connectivity, higher levels of English, and preexisting contacts with human rights groups and research bodies, local health professionals are likely better placed to report events in vetted formats that can be considered a trusted source.

Because Israel has more reporters and NGO workers per square kilometer, by far, than any other place on Earth, every minor report of incidents get reported and amplified. No such minor events – damage from ricocheting rubber bullets, for example – would even be reported in any other place.

A Syrian barrel bomb and an Israeli tear gas canister are counted exactly the same, as an “attack.” That is a perversion of statistics.

Not to mention that there are lots of ambulances pre-staged at riot locations, so there are more “health sites” in trouble areas to begin with in the territories, and more likely to be affected by Israeli riot suppression.

Beyond that, the PA and Hamas have Ministries of Health that routinely lie, their governments are oriented to slanting or making up statistics to make Israel look bad.

But the NGOs in this report, knowing that their comparative information is worthless, still choose to highlight that – because they want to make Israel look worse than every other nation on the planet.