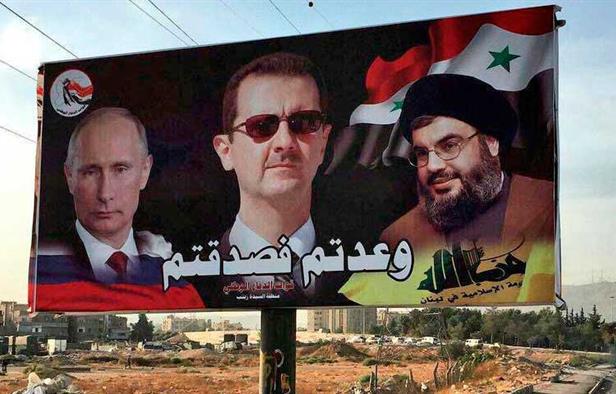 
Hezbollah military officials have held their first ever direct meeting with their Russian counterparts in a landmark sitdown that tackled the Aleppo front, according to a daily close to the powerful Lebanese militant organization.

The Lebanese daily said that the gathering “came at the request of the Russians” who were impressed by Hezbollah’s military performance during the “Battle of Martyr Abu Omar Saraqeb,” a failed rebel offensive launched in late October against regime positions in western Aleppo.

This report, if true, combined with the news of the Hezbollah military parade recently on Syrian soil, gives the impression that Hezbollah has transformed from a terror group to a conventional military force.

A Lebanese writer, Hussain Abdul-Hussain, thinks this is a good thing, at least for Lebanon:


The significance of a militia turning into an army is substantial. If Hezbollah sticks to such a format, it means that the party will lose its ability to fight asymmetric wars, and will be forced to engage in regular army-to-army battles. This means that Hezbollah will lose its ability to blend in with non-combatants, or launch its offensive from civilian neighborhoods. After all, tanks and artillery do not really fit in small streets and cannot be hidden behind bushes.

If Hezbollah’s militia sticks to its new setup as a conventional army, then the party will have to calculate its wars more carefully. Hezbollah already avoids battle with Israel after Tel Aviv announced its Dahiyeh (Suburb) Doctrine and razed large areas of Beirut’s southern suburbs, as well as Shiite villages in the south in the 2006 War. Israel’s indiscriminate bombing of neighborhoods containing Hezbollah and its supporters exacted a heavy toll on the party, and have forced it to avoid further wars with the Israelis, despite all the bravado from Hezbollah’s leaders.

With an army instead of a militia, Hezbollah will have to fight its future wars with Israel out in the open, which should be good news for Shiite non-combatants and the Lebanese at large, who lost a considerable chunk of their infrastructure, such as bridges, that Israel destroyed to hinder the movement of the party’s invisible fighters in 2006.

Now that Hezbollah’s fighters are visible, Israel will have less reason to hit Lebanon, and will instead engage Hezbollah in head-to-head combat, which Hezbollah says they are not shying from this time, arguing that in any future war with Israel, the party’s fighters will not sit back and defend, but might pressure the Israeli north, attempting to win and hold territory.

This is way too rosy a viewpoint. Just because Hezbollah is acting like a regular army in Lebanon doesn’t mean it has the desire to act that way against Israel. After all, the tactic of using human shields is worthless against the rebel forces in Syria.

Entire communities in southern Lebanon have been turned into hiding places for thousands of rockets among homes and schools. Hezbollah is not going to move them into easily identified silos in the countryside any time soon.

In short, Hezbollah’s perceived advantage against Israel is entirely based on its dismissal of the rules of war, which incidentally it also ignores in Syria. It is beyond wishful thinking to believe that the terror group will behave any more morally with tanks than without them.