Rashida Tlaib, the Democratic primary winner for Michigan’s 13th Congressional District and a shoo-in for election in November, was interviewed by In These Times where she revealed that she maintains an uncompromising stance towards destroying Israel.

And she implies that J-Street knew this about her when they supported her candidacy and gave her money:

One of the things [J Street liked] was my personal story I shared with them. I knew we weren’t going to agree on a number of stances. They didn’t ask me to waver once.

Yet she says explicitly:


What about a two-state solution vs. one-state?
One state. It has to be one state. Separate but equal does not work. I’m only 42 years old but my teachers were of that generation that marched with Martin Luther King. This whole idea of a two-state solution, it doesn’t work.

One personal anecdote of hers seems highly unlikely:

Seeing the unequal treatment in Israel, in the different colored license plates for Palestinians; and even in the ocean. When I was 19 and with my family and some of them had head scarves on, we all jumped in the water and the Israelis jumped out as if my cousins were diseased. That reminded me what I learned about the African-American struggle. That’s the lens I bring to Congress.

Arabs, including those with headscarves, routinely swim together with Israeli Jews in the Mediterranean and elsewhere. I’ve seen it myself. Here are some Muslim girls showering off the sand right next to Israelis in Bat Yam. Nobody batted an eye. 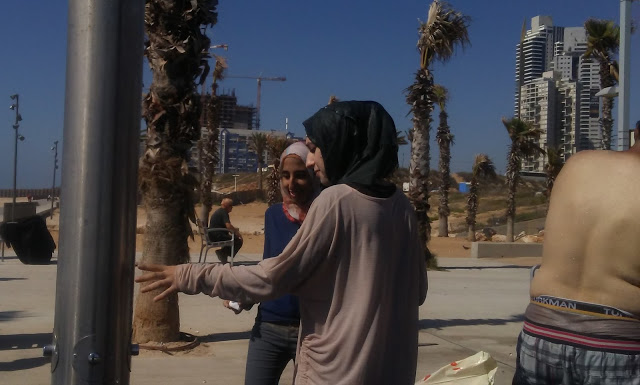 The story seems highly unlikely. (And it is telling that a future member of Congress doesn’t know the difference between the sea and the ocean.)

Perhaps the most troubling part of Tlaib’s interview was this other personal anecdote:

I support right of return absolutely. I have family that left [Palestine] in 1967. They left, took their keys with them. They thought they could come back, and they’ve never been back. My uncle would tear up because he couldn’t believe he couldn’t go back. He had to raise his kids in Jordan.

If we take Tlaib at her word, then her uncle is very possibly a terrorist.

Most of the people who left the West Bank in 1967 simply didn’t want to live under Israeli rule. They weren’t expelled, they went quite voluntarily, often against the wishes of Jordan’s king, throughout the summer and autumn of 1967. Even UNRWA doesn’t call them refugees.  Israel allowed many of them who changed their minds to return in the months that followed.

The only exceptions were the ones who had known ties to terror groups. Israel did not allow them to return to the territories.

In the 1990s, during the Oslo process, tens of thousands – perhaps more – Palestinians who lived in Jordan moved to the West Bank as well in anticipation of a possible Palestinian state that could hold more economic promise to them than Jordan did. Israel didn’t prevent them from coming.

And even today, Jordanian Palestinians can visit the West Bank.Those with yellow cards in their passports came from the West Bank and can visit.

If Tlaib’s uncle has not been able to even visit the West Bank, the only reasonable explanation is that Israel considers him a security threat.

Equally plausible is that Tlaib is lying, just as she appears to be lying about the “apartheid beach” where Israelis run out of the “ocean” because they see women with hijabs.

This future member of Congress either has family terror ties or she is a liar.