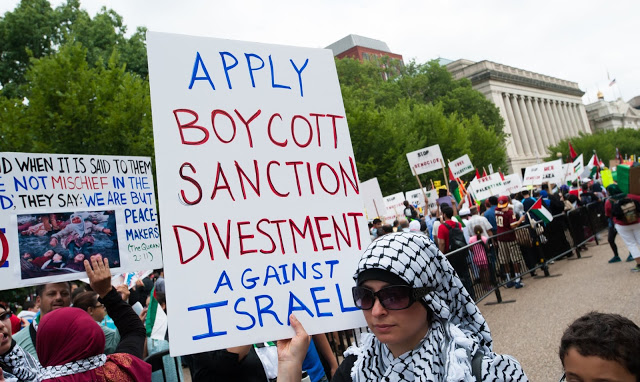 One of the legal mechanisms that the US did to fight this boycott was the Export Administration Act of 1979, the other is the  Tax Reform Act of 1976 . Their provisions are summarized:

The Export Admnistration Act (EAA) specifies penalties for violations of the Antiboycott Regulations as well as export control violations. These can include:
Criminal:
The penalties imposed for each “knowing” violation can be a fine of up to $50,000 or five times the value of the exports involved, whichever is greater, and imprisonment of up to five years. During periods when the EAR are continued in effect by an Executive Order issued pursuant to the International Emergency Economic Powers Act, the criminal penalties for each “willful” violation can be a fine of up to $50,000 and imprisonment for up to ten years.
Administrative:
For each violation of the EAR any or all of the following may be imposed:
General denial of export privileges;
The imposition of fines of up to $11,000 per violation; and/or
Exclusion from practice.
Boycott agreements under the TRA involve the denial of all or part of the foreign tax benefits discussed above.
When the EAA is in lapse, penalties for violation of the Antiboycott Regulations are governed by the International Emergency Economic Powers Act (IEEPA). The IEEPA Enhancement Act provides for penalties of up to the greater of $250,000 per violation or twice the value of the transaction for administrative violations of Antiboycott Regulations, and up to $1 million and 20 years imprisonment per violation for criminal antiboycott violations.

The Export Administration Act lapsed in 2018, and was replaced with the Export Control Reform Act of 2018, which says:

Title II – Anti-boycott Provisions. This title incorporates the existing anti-boycott provisions  from the expired Export Administration Act of 1979. These provisions discourage, and in some circumstances, prohibit U.S. companies from furthering or supporting the boycott of Israel sponsored by the Arab League, or certain other countries, including complying with certain requests for information designed to verify compliance with the boycott.

Section 202. Policy. This section states that it is the policy of the United States to oppose restrictive trade practices or boycotts imposed by foreign countries or international governmental organizations against other countries friendly to the United States or against any U.S. person. It also requires the President to issue regulations prohibiting any U.S. person, with respect to that person’s activities in the interstate or foreign commerce of the United States, from taking or knowingly agreeing to take certain actions with intent to comply with, further, or support any foreign boycott against a country that is friendly to the U.S. that is also contrary to U.S. law or policy. Certain exceptions to this general prohibition also apply. It further provides that these anti-boycott restrictions shall also be enforced through foreign policy controls authorized under title I. This section imposes certain reporting requirements on U.S. persons who receive requests to implement restrictive anti-boycott measures. And it provides that this provision preempts other state and local laws regarding compliance with foreign boycotts.

Now, BDS is not a governmental organization, so it would appear that since these laws only apply to boycotts promoted by foreign governments, these laws might not apply here.

According to Mondoweiss last January:

[T]he Central Council of the Palestine Liberation Organization (PLO), the sole legitimate representative of the Palestinian people, officially announced its support for the BDS movement and called, for the first time, on the international community to “impose sanctions on Israel” to end its ongoing, grave violations of Palestinian rights as stipulated by international law.

This is the most explicit and official adoption of the Boycott, Divestment and Sanctions (BDS) movement by the PLO.

Specifically, a statement released by the Palestinian Central Council, the second highest authority in the PLO, agreed to:

Adopt the BDS movement and call on states around the world to impose sanctions on Israel to put an end to its flagrant violations of international law, its continued aggression against the Palestinian people, and to the apartheid regime [Israel has] imposed on them.

The PLO, while not recognized as a country by the US, is certainly a quasi-government. For the purposes of this law it may very possibly be considered a country. Moreover, it called on other countries to essentially re-impose the Arab boycott.

Also, BDS proponents claim (falsely, but still) that the movement is a reflection of the desires of “Palestinian civil society.” If the business is boycotting Israel based on the stated tenets of BDS, it sounds like it is complying with a “foreign boycott.”

I am not a lawyer, but this law might already have some teeth to fight BDS on the federal level without having to create additional laws. Or, more likely, it could be slightly modified to cover the PLO and Hamas and other de facto governments.